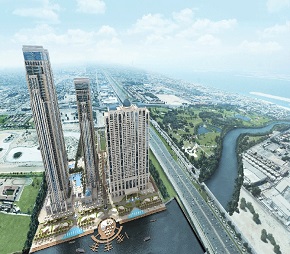 The Al Habtoor Group was established as a small engineering firm in the year 1970. It is now a major real estate developing company based in the United Arab Emirates. Al Habtoor Realty is a respectable and renowned conglomerate at present which has spread its wings in areas of hospitality, automotive, real estate, education and publishing. The company has managed to get a good name for itself and it still holds its ground both locally and in the international market. The company has grown to what it is because of the tireless efforts of its chairman - Khalaf Ahmad Al Habtoor.

The Al Habtoor Developers has been a very successfully run business in the United Arab Emirates. The company has now extended well outside UAE as well. It has in its employment a number of highly skilled, well qualified and extremely talented professionals. In fact, the company has earned its name and reputation rightly since its name has long been made synonymous with just any amount of trade and enterprise that there is, all over the world. So Al Habtoor Builders is a name that UAE will not forget easily or anytime soon. It has come to stay and that also for a long time. The company has long experienced constant yet gradual and dynamic growth. It has grown and flourished not just in the real estate sector but in various other sectors as well and it has only been possible because of the companys endless endeavours and the urge to be better than the best.

There is the existence of an Al Habtoor motor brand as well which includes the stalwarts like Mitsubishi, JAC and Chery, Temsa and premium marques like Bentley, McLaren and Bugatti. The Mitsubishi brand of Al Habtoor automobiles include various choice of sedans, 4x4s and a number of commercial vehicles. There exists a network of nine showrooms, nine service centres, four body shops and ten parts centres which are operational in the UAE. The Al Habtoor residential projects include The Residence Collection in Al Habtoor City, The Residences at the Al Habtoor Polo Resort and club, The Hacienda, etc. All of these come studded with the best amenities including spa, gymnasium, swimming pool, etc. The Al Habtoor upcoming projects come with ever finer and better surprise for even more redefining living experiences.