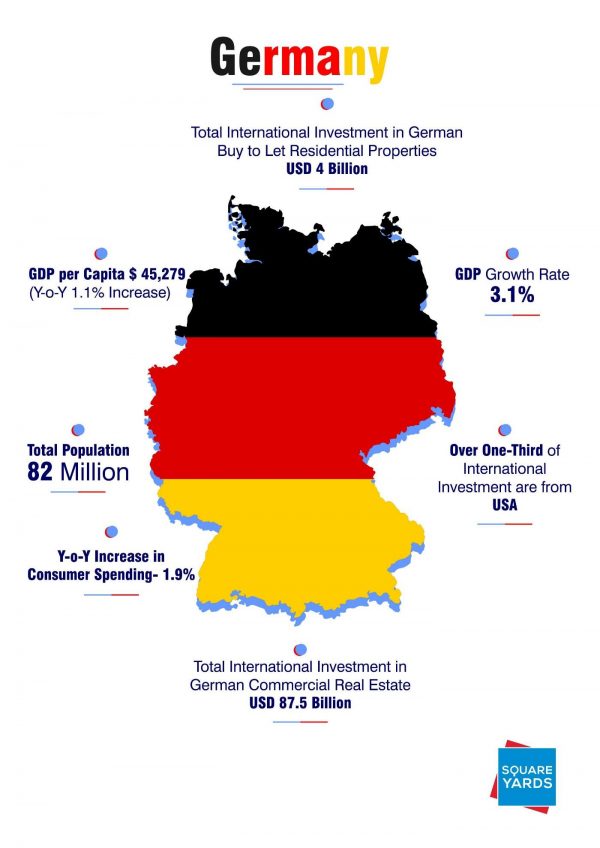 These cities are aggressively vying with London & Paris, other well established destinations in Western Europe in terms of international realty investment. German markets are aggressively moving up the curve & the market is not showing any sign of cooling of very soon.

Thanks to a scorching German economy that has defied the general norms of economic gloom prevalent in most of the major European market, German cities are increasingly emerging as the employment & start-up hubs attracting international residents in large volume.

Post 2010, over 175,000 new individuals have moved to Berlin. Likewise, it is estimated that over 450,000 individuals will move in the next 15 years. Berlin that has traditionally been a renter’s market with less than 20% of the populace owning a home, is now transforming into a residential hotbed with significant surges being registered in transaction volume.

As a consequence, prices have been moving up very fast in the recent times. Condominium & apartment flats have moved very fast with double digit growth.

There are multiple factors that are driving the growth juggernaut in the German real estate industry. Firstly, it is the economic growth momentum in the recent times, that has naturally translated into more jobs & employment opportunities & hence higher demand for quality residential units.

Secondly, the entrepreneurial culture of German cities is attracting upcoming start-up enthusiasts & entrepreneurs to set up their base in Germany. Cities like Berlin & Hamburg are major epicenter of various international start-ups. Thirdly, the German real estate is still priced very moderately when compared with other major European cities such as London, Paris, Zurich or even Moscow.

The economical prices in Germany adds further value to its real estate dynamics & makes it a sought after asset class for the investor fraternity as well as startups & business houses who look to use Germany to start their business.

The high investment in German real estate coming from international & domestic investment have led to very low rate of vacancy in the German cities. Similarly, the total number of new launches have also ramped up in the recent times. Nearly 8000 residential units have entered in Berlin alone- a 100% jump over previous year. In 2016, around 12,000 new units are expected to be built.

German real estate markets are also known for its inherent stability, that sometimes put it ahead of other markets such as Paris & London. For instance, take the case of prime office yield over the last 10 years. In Germany, it has varied between 4.10% & 5.3%, a narrow variance of just 120 basis points.

In the times to come, Germany will continue consolidating its position as one of the most stable economies in the EU. In a post BREXIT environment, the underlying stable business environment in Germany will give a further pull to discerning buyers & investors. The country also has a large job market with around 43 million people in employment. With continuous dip in unemployment level, the job market will further expand thereby further stimulating the demand of residential units in Germany.

However, foreign investors who are looking to invest into German market needs to consider some facts, before making a decision. Generally, there are not very strict guidelines for German brokers. Hence, one should be careful before choosing & moving ahead with a broker. One should also be very well aware of the locality wherein one is planning to invest their monies, as different locations have different appreciation potential.