Kim Kardashian is one of the most known global personalities and is not just a model, but an American Media Personality, an actress, a businesswoman, and a socialite. Kimberley gained attention initially as a stylist and a good friend of Paris Hilton but got much more attention after her scandalous tape was leaked in the year 2002. The whole family got noticed after starting their own TV reality show “Keeping up With the Kardashians”. So, let's drive through the halls of the Kim Kardashian house with the play of words here.

Kim lived with her parents, Kris Kardashian, and her step-father, Bruce Jenner in a house in Hidden Hills, California. The house was valued at 4 million and the family lived there after buying the house after the airing of the first episode of the series.

Kimberly and her family have been in the front row when it came to investing in real estate. She has properties in Hidden Hills, Beverly Hills, and Calabasas. When no longer in use, she listed them on the market, for selling them.

Inquisitive enough? Let’s dive into the details and aesthetics of “The Kim Kardashian” house.

To begin with, Kim moved into a Condo in Calabasas which was later turned into an office and was listed on the market in the year 2019. This was a luxury residential condo with three bedrooms, spread over an area of 2260 square feet.

After a while, Kim moved out of her parent’s house and got a Mediterranean Mansion property in Beverly Hills, California.

Kim shared this property with her former husband Kris Humphry. The house has a vintage exterior but was loaded with classic and modern interiors with the minimalist and contemporary style of interior and decor elements. The house incorporates 5 beds and baths with a master bedroom vaunting a vintage fireplace, an exclusive dressing room, and a bathroom.

The Tuscan-style villa spreads on an area of 3800sqft with an outdoor sitting area, esteeming the green area, which also features a gazebo, wall waterfall, and a pool. The interior of the home is mostly drenched in minimalist tones with wooden window frames and furniture.

Although, this home was put up on the market for selling after Kim moved in with Kanye West and now its time to learn about the house she’s stayed in and built her family, until recently, when she has moved back into her property in the hidden hills. 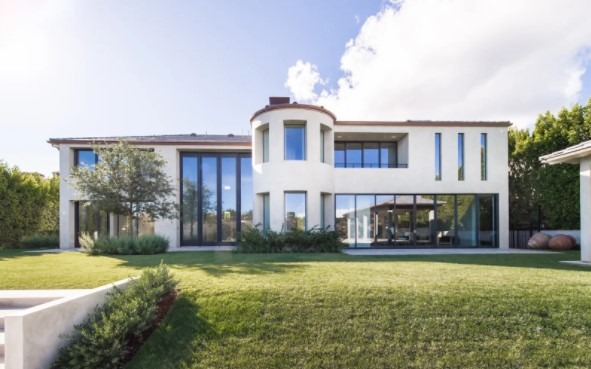 Kim calls her home and we enquote, “a minimal monastery”. Initially, Kim thought that the house would be perfect for her and the kids to grow up, but Kanye was less sure about it. Both of them worked their way through it and made it the white mansion that it is.

The spaces were designed back in the year 2014 by a Belgian designer and it is subtly reflected by the arches and the text architecture that the space carries. The home encompasses two swimming pools, a private theatre, two spas, two barbecues, a two-story playroom for their children, a large walk-in closet. The mansion sits on 3.5 acres of land and has its own vineyard. Have you checked out their home yet? Let’s take a tour of the Kardashian-West Mansion y’all.

While Kanye was intrigued with the work of Axel Vervoodt, he was sure that he wanted that kind of minimalistic fluidity in the architecture of his residence. He was determined enough to have him work on redoing the McMansion.

Vervoodt reflected his signature wabi-sabi style in the work, creating enormous and partial spaces with neutral monotones. The aesthetics of the house is a mere rumination of art and literature, because of the poetic significance it puts forth. The design of the house speaks of simplicity and calmness, which lies in contrast to the chaotic world. The architecture of their abode portrays prominent inspiration from the Gothic architecture, which mirrors via the use of Gothic elements including the arches. 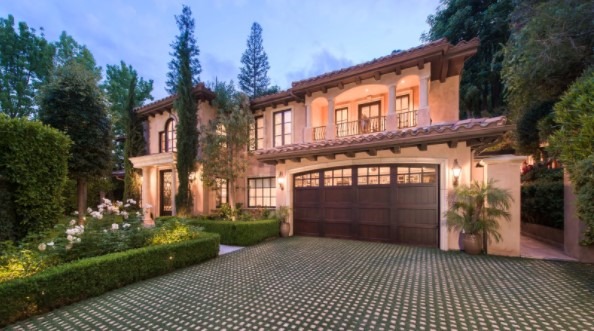 The concept of Kim Kardashian’s house mainly revolves around making the space look minimal yet enormous. The planning and interiors of the house catches much attention in making the house a contrasting image to the exterior chaos and creating a space that segregates it from the outside world, like a monastery.

Coming to the basic planning of the house, the layout plan is linear in nature, with green area on one side. The planning done is basic with a play of interiors, which makes the place a unique piece of art.

The living room of their house barely looks furnished, but guessing by the style of Vervoodt, that is something that catches the beauty of being incomplete. The space almost looks like a blank canvas with the enormous white piano and the furniture coinciding with the same tone. For eg: the Jean Royere table and chair.

The sheer ivory curtains act as the gateway towards the preceding greens. The large window in the room allows a lot of natural light to enter the room, adding up the existing space. Some accent elements including the fiberglass sculpture by the artist, Anish Kapoor are placed around the room, playing the role of statement pieces. The lux of the room comes into play with the variant tones of white, coinciding with the natural light and the greens. The kitchen has been planned in an open island layout, with a round dining table and a taupe couch, adorned with coordinating cushions placed adjacent to each other.

Coordinating with the living room, drenched in neutral tones, the kitchen encompasses a marble top counter in a reflective, glossy texture, and white oak cabinets. The whole space comes together with the placement of accent pieces including ceramic vases and succulents. 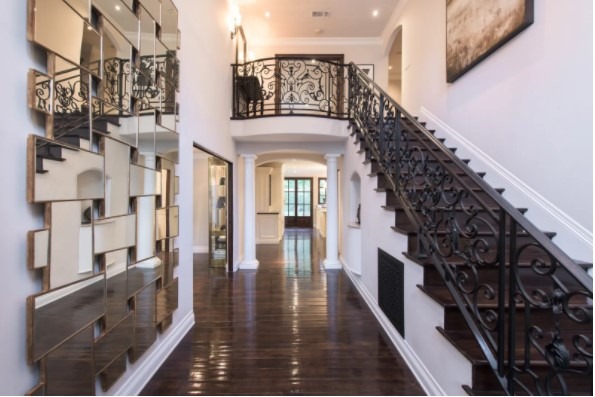 This all-white corridor is definitely one of the highlights of the Wests’ house. The dome shaped sections and concrete gothic arches add that three-dimensional effect to the hallways of the corridor. In addition to this, the arched shaped windows bring in ample natural light and cater to the homogenous architectural style of the house.

And why not? Its definitely a space to show off.

What are we really talking about in Kim Kardashian’s house, if we are not talking about her walk-in closet? This closet might just be the dream to many.

Kimberley’s closet is basically divided into two parts, one being the devoted space to the bags and shoes, and the other being a collection of cupboards, shelves, and dress racks, everything color coded.

The walk-in closet blends in beautifully with the space, maintaining the overall neutral tone aesthetic with white walls and contrasting taupe hardwood floors. We dont think we really need to state the accent elements here, because the statement is the floor-to-ceiling shelf ornated with bags and accessories from brands like Louis Vuitton, Balenciaga, Birkins, Hermes, etc.The corner of the dress racks comes with a large velvet ivory couch laying upon those hardwood  floors. There is a separate room in the house which plays the role of catering to the recreation element in the house. The room is accentuated with a statement grey couch and an enormous sculpture by Isabel Rower ( supposedly larger-than-life ). This room also involves a projector facing the couch for the family to enjoy a movie night.

The Wests made sure of their kids having a good time and the play area does definite justice to this Although, this part of the house might be in contrast with the rest of the house, because of the obvious concept flow of designing for kids. The play area is a two-floor space involving more vibrant interiors including shades of lavender and pistachio along with brown hardwood floors.

The room is packed with efficient storage along with accent elements being the stuff and plush toys. Creative indeed.

The West house speaks of art and culture, right from appreciating the architecture forms to ornamenting it with accent elements and statement sculptures and pieces from well-known artists and craftsmen. The house is an epitome of minimalism, but communicates grandeur, extravagance in an orderly fashion. The house is something definitely that one should know about.

The couple also went ahead and purchased a four-bedroom house, over an area of 3,900 sqft for 2.975 million dollars. They purchased this house adjacent to their main house in order  to expand the built-up area of the compound.

Kim Kardashian and her family have purchased multiple properties, in LA, in New York, including ranches, condos, flats, homes, mansions, etc.The McMansion is one of the greatest and the most talked about properties out of all the residences. Apart from their homes in Hidden Hills and Calabasas, Kim also has a property in Psalm, LA where she’s been living with her kids after separating from Kanye West. However, this property speaks most aesthetic and admirable features. We hope this exhausting piece still kept you hooked and it did, if you are reading this. After all, it's the KARDASHIANS!

Kim Kardashian’s home is worth $60 million.

Where is Kim Kardashian’s House?

Where does Kim Kardashian live now?

Kim lives in Psalm, LA with her kids, North, Saint, and Chicago.

How much was Kylie’s house?

Kylie’s house is worth 16  million.

Nitin Kumar
« All You Need To Know About Digital Gold
How to Buy Physical Gold Bars? »

7 Things To Remember While Building A Vaastu Compliant Home

‘Green’ not just an operative word but an imperative necessity