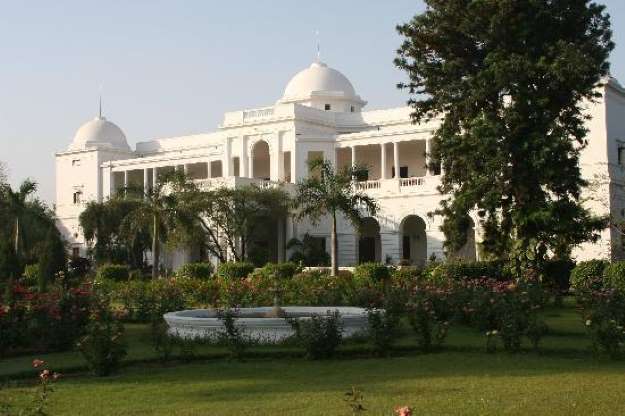 As extravagant as it might sound, the Pataudi Palace would not disappoint you with the extravagance and the traditional royalty it comes with. The royal palace is spread on an area of 10 acres and built on the lines of a colonial mansion. The palace is worth 800 crores and is located in the Pataudi town of the Gurgaon district, Haryana.

The palace was designed by the Architect Robert Tor Russel in assistance with an Austrian architect, Karl Moltz Von Heinz in the year 1900. Also known by “Ibrahim Kothi”, the palace was acquired by Saif Ali Khan as an heir to Mansoor Ali khan Pataudi.

The Pataudi Palace not only speaks of the elite lineage, but also carries historical importance, and the entombment of Saif’s ancestors which adds sentimental value for him. Although the palace was leased to the Neemrana Group of Hotels by Mansoor Ali Khan Pataudi, Saif’s genuine efforts got him his family heritage free from the hotel chain.

The palace was initially built by Saif’s grandfather, Mohammad Iftikhar Ali Khan Pataudi (the 8th Nawab of the Pataudi Family), the ruling monarch at that time for his wife. The palace has passed on as a legacy in the Pataudi family and is currently under the name of Saif and would be acquired by Taimur Ali Khan once he is 18.

In the year 2014, Saif Ali Khan (the 10th Nawab) repossessed the palace, but it was closed for renovations. The Akbar Manzil, which was built in the year 1857, was later converted into a kachehri (judicial complex).

The complex and the planning of the Pataudi Palace

The Pataudi palace stands in a 10 acres built-up area, surrounded by vast green lawn areas and a fountain pool at the entrance of the palace. The intriguing landscaping comes down to the site showing definite geometric features and a homogenous sense of planning. The site planning and the key architectural elements used in the elevation and planning of the mansion subtly speak of Islamic and Colonial architectural style.

Even the facade of the structure shows prominent features of colonial and Islamic architecture, with the grand arched entrance and how can we even forget the dome structure that sits on the building.

The palace was a competent hotel, up until the recent years and the interior planning of the manoir has been done accordingly:

The mansion consists of 150 rooms, including 7 bedrooms, 7 dressing rooms, 7 billiard rooms, all connecting to the multiple dining and living areas via long hallways and corridors.

Walking through the hallways of the mansion, the interiors of the place articulate grandeur and luxury, with the halls telling stories about their family and heritage.

The Luxurious rooms inside the Pataudi palace

Every room of the Pataudi Palace speaks vintage, be it the color tones being used, be it the door and window framings. The basic idea of doing the interiors of the place involves using neutral tones as the base color of the room, along with using wooden furniture. Some of the rooms have also been graced with fireplaces and using the right material along with the contrasting or neutral-toned curtains puts the whole thing together.

The high ceilings of the room justify the construction era and the architectural style at that time. Elements like the pendant lights and vintage lights bring the whole picture together.

The study room that speaks royalty

The study room in the palace not only carries potential architectural value but also connects with the actor because of this interest in reading and libraries. As a matter of fact, Saif put in efforts when it came to designing and decoring the library in his Mumbai residence.

The study room walks parallel to the vintage and colonial vibe of the palace, only the addition of obvious storage and bookshelves and a bit of color to liven and brighten up the place can be seen. The placement of lighting accents and the vintage wooden furniture completes the whole look of the room.

The two stairways are connected via a common space, verandah. The space is brought out by well-composed interiors, including the black and white chessboard-like flooring, a carpet, a pool table, and the whole layout comes together with wooden furniture and vintage furniture.

The Royal Charm of Pataudi Palace

Pataudi Palace, also known as Ibrahim Kothi has grand hallways, tall arches that ooze grandeur and elegance. Fine paintings, artwork, and photographs with preserved traces of the family’s royal history adorn the walls of the palace.

Visiting and staying at the Pataudi Palace.

The Pataudi Palace was used as a heritage hotel previously. Although, by the year 2014, the staying and the tag of it being a heritage hotel was discontinued. The palace can still be visited.

The Pataudi family likes to spend their winters and plan a staycation at the Pataudi Palace.

The Pataudi Palace has not only caught eyes but has also been made through like one of those that speaks the history of architecture and Nawabs, as a matter of fact. The geometrical alignment and construction of the built-up structure seem to be inspired by the Islamic and Colonial Architecture. The palace has also been used in Bollywood movie shoots including movies like Veer Zara, Tandav, Mangal Pandey, Eat Pray Love, Rang De Basanti, etc.

We hope you had a great literal tour of the palace and made you inquisitive enough to visit the palace someday soon.

Who is the owner of Pataudi palace?

Saif Ali Khan is the owner of the Pataudi Palace.

Who will inherit the Pataudi palace?

Taimur Ali Khan would be inheriting the Pataudi Palace

Can you stay at the Pataudi Palace?

It was a facility until 2014. Now, however, you can visit, but cannot stay at the Pataudi Palace.

What is Pataudi Palace worth?

Pataudi Palace is worth 800 crores.

Saif Ali Khan is one of the highest-paid Bollywood actors globally, with a net worth of $150 million dollars.

Saumya Dixit An ardent believer of Karma, a sky gazer, a caffeine addict, and a professional story-teller, Saumya is associated with the marketing and communications industry for more than 7 years now. She believes words are a powerful force available to humankind, and we must choose them wisely. In her constant effort to live fully, she follows a consistent workout regime, enjoys different genres of music, sings karaoke and explores off-beat destinations.

Saumya Dixit An ardent believer of Karma, a sky gazer, a caffeine addict, and a professional story-teller, Saumya is associated with the marketing and communications industry for more than 7 years now. She believes words are a powerful force available to humankind, and we must choose them wisely. In her constant effort to live fully, she follows a consistent workout regime, enjoys different genres of music, sings karaoke and explores off-beat destinations.
« Modern Small Living Room Ideas 2020
Sustainable urban futures and how they were accelerated by the pandemic »