Home » Step Inside Kim and Kanye West’s Mansion in California

Step Inside Kim and Kanye West’s Mansion in California 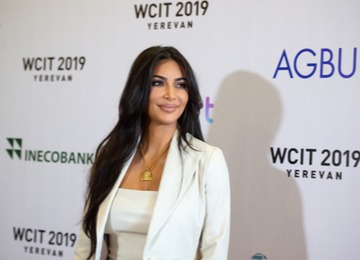 American media personality Kim Kardashian and rapper Kanye West are one of the most talked-about megastar couples. A few years back, this power couple snapped up their estate with an extravagant 16,000 Sq. Ft. real estate in California’s Hidden Hills.

Kim and Kanye popularly known as Kimye, invested in this place, which they call their dream home and almost seven years later transformed it into one of the most fascinating pieces of architecture. The interior design inspiration behind Kim Kardashian and Kanye West’s mansion is a metamorphosis from the suburban mansion to a minimalist monastery, designed by Belgian designer Axel Vervoordt and Kanye himself.

Let’s have a look at Kim Kardashian and Kanye’s house interior which is nothing less than a testament to the creative minds of a boundary-defying musician and a fearless entrepreneur & reality TV star.

Ultra-Minimal Interior and Neutral Colour Scheme of the Living Room

Kim Kardashian West’s pristine living room is ultra-minimal and elegantly decked up in white and cream undertones. One of the major highlights of the living room and Kanye’s most prized possession is an original Jean Royere Polar Bear Sofa. A limestone cocktail table with rounded edges, an unbleached Steinway 18th century piano surrounds the sofa in the living room.

Kim and Kanye both are quite proud of their hallway, which Kanye co-designed with Axel Vervoordt. This is the space where kids mostly love to ride their scooters.

A sophisticated dining room leads to a large kitchen that overlooks a lush garden space. The kitchen space has pale wooden cabinetry and the perfect aura that the whole family likes spending most of their mornings and afternoons here.

A large custom walnut table on an iron base sits in the Breakfast corner.

Some Stand-Out Features of the House

The bare minimum furniture, off-white plaster, natural aesthetics of Kim Kardashian and Kanye’s house interior is thoughtfully designed to emphasize the importance of silence. On the other hand, their daughter North’s bedroom is in stark contrast to the house interior.

The walls of North’s bedroom are painted in a candyfloss pink colour with an embossed butterfly motif on the wall. The dressing table, chair and everything else in the room are in different shades of pink colour. Other incredible features of the place include a private theatre and a playroom with two stories for their children Saint, North, Psalm, and Chicago.

Giant Lighting in the Bathroom

The couple has got just the right amount of lighting in every corner of their home. Lighting in their big bathroom is one giant light on the ceiling that calms mind eyes and helps in reducing cellulite as Kim says. The glass Bathroom shares its glass walls with the lush garden area designed by Wirtz International Landscape Architects.

Since there’s no jacuzzi in the house, the water of the pool is kept hot most of the time.

Speaking of the uncompromising minimalism in their home design scheme, the couple says as their work lives are chaotic, they always wanted to have such home interiors where they could instantly feel the calmness.

While looking at the pristine natural palette on walls, one also wonders about the challenges of raising four kids in that kind of environment but Kim and Kanye have made their whole space eminently kids friendly.

Every space in the house works as a play area for kids. They love to play piano in the living room, do cartwheels in the hallway, jump around on the axel tables in the breakfast corner, and sometimes use them as their stage. Kim and Kanye describe the vision behind their home is completely built around their family.

Saumya Dixit An ardent believer of Karma, a sky gazer, a caffeine addict, and a professional story-teller, Saumya is associated with the marketing and communications industry for more than 7 years now. She believes words are a powerful force available to humankind, and we must choose them wisely. In her constant effort to live fully, she follows a consistent workout regime, enjoys different genres of music, sings karaoke and explores off-beat destinations.

Saumya Dixit An ardent believer of Karma, a sky gazer, a caffeine addict, and a professional story-teller, Saumya is associated with the marketing and communications industry for more than 7 years now. She believes words are a powerful force available to humankind, and we must choose them wisely. In her constant effort to live fully, she follows a consistent workout regime, enjoys different genres of music, sings karaoke and explores off-beat destinations.
« Hindu Daughter Holds Equal Rights to Ancestral Property: SC Clarifies
Top Localities to Invest in Mumbai Real Estate »

Why Aussies are going insane for the Bubble House In…

5 Tips for Designing a Window Seat at Home