Sushant Singh Rajput’s home: A reflection of his true genius 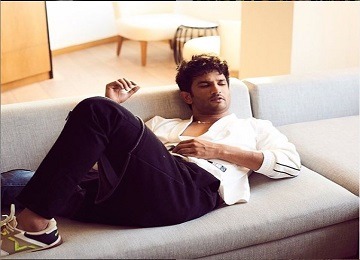 Sushant Sigh Rajput does not need any introduction in today’s date. He was a brilliant actor who sadly left all of us at a very young age. He was an actor but also a genius. Like every other kid, he also dreamt of becoming NASA scientist and then a pilot and settled for being an engineer, but he fulfilled his dream and became an actor to live like all of them. His home is the biggest reflection of all he was from his heart. To know him better let’s take a peek in Sushant Singh Rajput’s Luxury Bandra House.

In his living room, he has got multiple ancient pictures and every picture states a different story, a fascinating one. He calls his living room as Time Travelling Room where you can travel in past through those pictures and can look up through different galaxies using his time traveller telescope “Meade 600”. He loves gazing into stars, checking out rings of Saturn, the four moons of Jupiter and Andromeda (galaxy).

His time travelling room is fascinating, but his study room takes us to a different level. He has a great collection of books where he not only read books but feels like talking to writers who have written something great for this world. The level of imagination is unparalleled. His yellow study table tells us about his favourite colour which is a unique taste. His home is not based on any theme or can be called vintage but part of his imagination and nerdy references which brings us closer to his personality.

His entertainment room is one magical room which he also calls as walk over the moon. The room has his pictures from NASA in the costume, with multiple others showing his fascination for the galaxy. It has a projector and many small things which draw us close to him. The miniature Mustang is established as the memory of his childhood which he got from some snack pack. A projector has been set up along with multiple small things made by mending and fixing. He considers those things as a symbol to himself and his career. “Mended and fixed to become something”.

His home is not vintage nor the decorated posters and paintings, but he was one of his kind genius who tried to show himself through his home, a true reflection of himself.

Shina Kalra Shina Kalra is another 27 year old, who chooses to go by her heart than her brains. She is expressive yet hideous, extrovert yet introspective and fun loving yet intense. Limitless thinker, daring dreamer and a crazy doer, which are some of highlighting shades of her character. She is an author, storyteller and a poet, all in one.

Shina Kalra Shina Kalra is another 27 year old, who chooses to go by her heart than her brains. She is expressive yet hideous, extrovert yet introspective and fun loving yet intense. Limitless thinker, daring dreamer and a crazy doer, which are some of highlighting shades of her character. She is an author, storyteller and a poet, all in one.
« “This is the perfect time to invest in Affordable Housing”, says Pradeep Aggarwal, Founder and Chairman, Signature Global
Transitions that are ushering a new dawn for the real estate sector »

DIY ideas to do up your Balcony this Monsoon –…