Tughlaqabad Fort Delhi: Symbol of Might and Power of the Tughlaq Dynasty 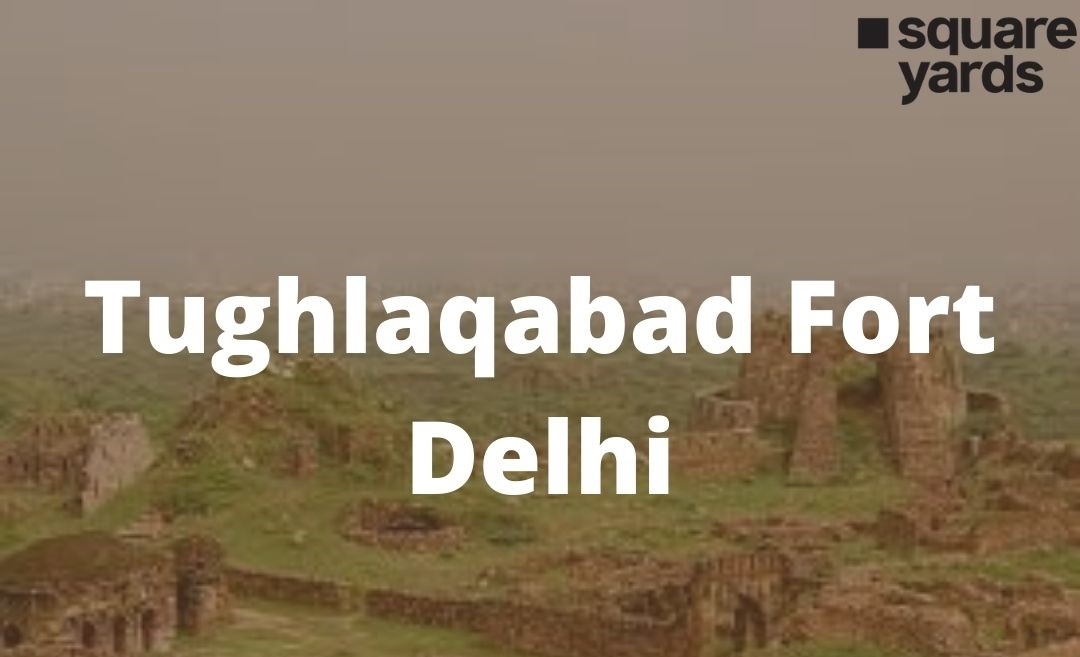 What remains today as the ruins of a prominent dynasty that ruled the national capital for 100 years was a mighty fort symbolizing power in its time. The Tughlaqabad Fort is an architectural marvel which was known for its dynastic pride and strong defense. It is one of the only two forts left by the Tughlaq dynasty.

The history of the infamous Tughlaqabad Fort is as complex, chaotic, and grand as that of any other prominent architectural site in Delhi. Ghiyasuddin Tughlaq was an important member of the army of Sultan Ala-ud-din Khilji. With his perseverance and hard work, he was able to achieve the title of Warden of Marches. He also maintained the same position during the rule of Qutb-ud-din Mubarak Shah. Once, when they were traveling to Delhi, Ghiyasuddin suggested building a fortress in the rocky altitudes of the area where the fortress is built now. He believed that it would give them a stronger position to defend their dynasty. Khilji laughed him off and did not believe in his intentions. Soon, Mubarak was assassinated by his own minister Hasan who became the Sultan of Delhi. It was then that Ghiyasuddin Tughlaq defeated Hasan and built the mighty Tughlaqabad fort

The architecture of Tughlaqabad Fort

The double-story bastions and the walls filled with rubble left abandoned in the majestic national capital, is a sight that will leave you in awe of it. The ruined fort is surrounded by sloping and tall walls which are around 15 meters high and the walls contain battlement parapets. The architecture of the Tughlaqabad fort is divided into two parts, one out of which is occupied by a still citadel and the other was the ruined city to the North. It was linked to the Adilabad Fort by a causeway that has now been built as a road. The causeway was originally built on a water reservoir, the water of which is now dried up.

By taking the artery or causeway in the Southern side of the fort, one can reach the tomb of Ghiyasuddin Tughlaq. This tomb was constructed by the man himself in an archipelago. So we can understand the source of the stunning beauty of the tomb. The tomb consists of three graves; one of Ghiyasuddin Tughlaq and the other two are believed to be his wife and sons.

Surrounded by a deafening silence and poignant loneliness, the tomb’s architecture draws attention in an instant. The ceiling is carved with a lotus pattern and is as beautiful as the entire inner vibe. Another tomb complements the tomb of Ghiyasuddin Tughlaq which is also similar in design and architecture and belongs to a General in Ghiyasuddin’s army, Zafar Khan.

Who was the founder of the Tughlaq dynasty?

The Tughlaqabad fort is a standing witness of the grandeur of the Tughlaq dynasty and that of the national capital, Delhi. The fort is a stunning souvenir of the past and there are many facts regarding the fort which you might not have heard before. Read on to be amazed!

The entrance fees for Indians above 15 years is ₹5 and for the foreigners, it is ₹100.

The entrance for children (below the age of 15) is free of cost.

The best time to visit the Tughlaqabad fort is during the cool and dry season. So, the months from November to March are considered the best to sightsee at the Tughlaqabad fort. The temperature of Delhi falls down to 15 to 20 degrees, so the weather is light and pleasant. It is suggested that you wear light clothes and carry a hat and sunglasses. It would only require 2 to 3 hours for you to explore the entire fort.

How To Reach Tughlaqabad Fort?

The Tughlaqabad fort is situated on the Mehrauli-Badarpur road and is easily accessible. Being the national capital, Delhi is well connected to different states and you can easily reach to visit the Tughlaqabad fort through the following means:

Via air – The Tughlaqabad fort is just 20 km away from the Delhi airport. A cab can drop you off straight to your destination.

Via rail – The fort is at a distance of 25 km from the Delhi railway station. Any mode of public transport will help you reach the fort in no time.

Tips to travel to Tughlaqabad Fort

The old ruins of the Tughlaqabad Fort is a must-visit place and you should explore all the nook and corners of this fort from the tombs to the archaic walls. But before you get all too excited to visit the fort, you must keep these important tips in mind:

Places to visit near Tughlaqabad Fort

Get a chance of getting close to our grand history by visiting the mysterious yet spectacular Tughlaqabad fort. Admire the panoramic views, unique architecture, stroll around the huge area and check out for yourself if the Tugalkabad fort is really haunted or not.

Yes, it is safe to visit the Tughlaqabad fort, but you need to take care of your belongings and yourself. It is advised that you should visit the fort with a group of people.

Why was Tughlaqabad fort abandoned?

What is Tughlaqabad fort famous for?

Who built Tughlaqabad fort in Delhi?

The founder of Tughlaq dynasty, Ghiyasuddin Tughlaq built the famous Tughlaqabad fort in the year 1321.