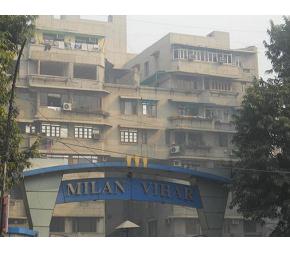 ₹ 1.59 Cr to 3.05 Cr
₹ 12692 Per Sq. Ft Onwards
Status: Well Occupied
Ratingi
Our proprietary project rating system assesses the level of amenities and specifications provided inside a residential project to help you objectively evaluate the comfort & convenience that you are going to get. We rate it like we were buying it.
Decision Drivers
i

Kailash Nath Milan Vihar is a luxurious Project developed by one of the Delhi well known Developers Kailash Nath. The various configurations in which the flat units are available on sale in this project are 3 BHK flats at a price of Rs 1.59 Cr with Property size of 1250 Sqft, 4 BHK Flats at a minimum price of Rs 2.79 Cr and maximum price of Rs 3.05 Cr with Property Size ranging from 2200 Sqft to 2400 Sqft. The Project is perfectly located in Patparganj, East Delhi and well connected by major road(s) like NH 24, Wazirabad Road.. The Status of the Project is Well Occupied.

Kailash Nath Group is a leading business house having expertise across several verticals including clothing and real estate. It has been a major player in New Delhi and Shimla’s housing markets over the last 47 years. Founded in 1969 by Late Kailash Nath & Prakash Nath, it built New Delhi’s first ever skyscraper called Himalaya House at Kasturba Gandhi Marg. It was also one of the first companies to enter Navi Mumbai’s realty market in 1983. The portfolio of Kailash Nath projects covers multiple residential, group housing and commercial projects across Navi Mumbai, Delhi, Kolkata, Gurgaon, Goa, Greater Noida, Ghaziabad, Ludhiana and Lucknow. It is also known for taking care of major contractual work across Bangalore, Jaipur and some of the above mentioned regions with major clients like Army Welfare Housing Organization, Punjab PWD, Life Insurance Corporation of India, MMTC under its belt. Landmark properties include Milan Vihar, Kings Reserve, Ajudhiya Apartments, etc.

Most Viewed Properties In Delhi