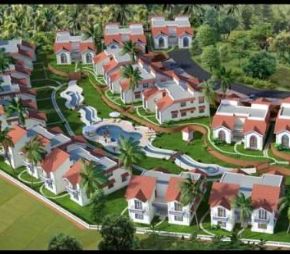 ₹ 93.00 Lac to 1.05 Cr ₹ 6200 Per Sq. Ft Onwards
Advanced Stage
Riviera Gardenia is an exclusive Project located in Revora, Goa North .The total area in which Riviera Gardenia has been built is 5 acre. This project has been developed by Riviera Constructions Pvt Ltd who are one of the reputed developers in the Goa. The Project current status is Advanced Stage. It has 34 Units. The Apartment units are available in various configurations like 2 BHK flats at a price of Rs 93.00 L with Property size of 1500 Sqft, 3 BHK flats at a price of Rs 1.05 Cr with Property size of 1700 Sqft.
1 /projects-in-revora-goa
Check Hottest Selling Project in

Revora is a town, 12 kilometers from Mapusa in Bardez, Goa, India. It lies on the banks of the Chapora River. It comes in the domain of Tivim voting demographic. The town is renowned for its seventeenth century church. The conventional control of the villagers has been paddy development and angling in the waterway. Numerous villagers are currently engaged with sand extraction industry, wherein sand separated from the waterway informal lodging sold to the development business. North Goa is incomprehensibly unmistakable as this is the place the fundamental trip spots are found in this bit of Goa. North Goa is generally famous for its beaches which include Arjuna Beach, Candolim Beach, Mandrem Beach, Calangute Beach, Arambol Beach and two or three others. Other vacationer goals join Fort Aguada, The assemblage of Mae De Dues and the asylum of Boghdeshwara. Goa is a state on the South Western shore of India inside the shoreline front area known as the Konkan. It is constrained by Maharashtra toward the north and Karnataka toward the east and south, with the Arabian Sea moulding its Western float. It is India's humblest state by zone and the fourth tiniest by masses. Goa has the most shocking GDP per capita among the conditions of India that is more than over two times that of the country.