Home » GMR to build new business park in Hyderabad; realty market may get another boost

GMR to build new business park in Hyderabad; realty market may get another boost 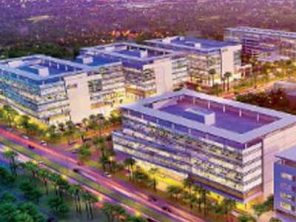 Hyderabad’s real estate market is on a roll in recent times and political stability coupled with pro-active Government measures have contributed to this growth. Demand has gone up considerably for homes not just in Hyderabad but also along its peripheries and outskirts. People are migrating to the city in large numbers for employment and this is naturally keeping the housing market ticking. The city is also witnessing a major spurt of infrastructural growth and progress. The Metro expansion, widening of roads and other physical infrastructure development have contributed towards further growth of the realty market.

Hyderabad has one of the biggest and most flourishing IT and ITeS sectors in the country and this sector is contributing towards sizable housing demand in tandem with biotechnology, pharmaceuticals, start-ups and more. Several top MNCs and other conglomerates are now choosing to set up base in Hyderabad and the growth of the IT corridors in and around the city have also contributed towards the development of residential housing hotspots in several key locations. What is also drawing investors is the steady growth of the commercial realty market here which also rubs off rather well on the residential segment. Additionally, prices of property are comparatively lower in Hyderabad as compared to several other metropolises in the country. Several premium projects are being developed throughout the city including Incor One City, Incor VB City and NCC Urban One among others. Now, the housing market is set to get another major boost with a new business park announced by GMR.

GMR Business Park to be mega development in Hyderabad

GMR’s announcement of its upcoming business park has definitely contributed to oodles of optimism amongst real estate industry watchers. Here are some of the key points worth noting in this regard:

What you can expect at this project

The GMR Group believes that a key challenge is the common perception amongst residents of Hyderabad about the Airport being too distant from the main city. This perception is set to change rapidly over the next few years and these developments will lead to a major real estate boost for the entire region and surrounding areas alike. The completion of the Airport City and the business park will make this zone a hotspot for both commercial and residential growth as per several experts.

In close proximity to this office park, GMR has also planned a logistics and warehousing park that will cover a whopping 120 acres along with a retail project across 19 acres. These projects will naturally transform the entire region in the near future as per reports. The company is still working on the blueprint for the retail zone while it has inked the MoU (Memorandum of Understanding) with E-Shang Redwood or ESR which is based in Singapore, with regard to the development of the logistics park. The first of the 5-6 towers at the project may be ready by the end of the year itself as per reports. This business park will emphasize on drawing more IT and ITeS players, technology companies and other businesses not just from India but worldwide with infrastructure tailored to suit all their needs.

This park will not be a competing development when it comes to the Cyberabad commercial district or HICC and will be offering only alternatives to companies as per GMR officials. The business park will be using innovative, new-age and eco-friendly green technologies for its development in tandem with offering new-generation high-quality digital infrastructure and other facilities. The retail park being planned will integrate movie theatres and shopping malls while the entertainment zone nearby will be a hotspot for employees working here.