Home » What did the real estate sector gain from the Union Budget 2020-21?

What did the real estate sector gain from the Union Budget 2020-21? 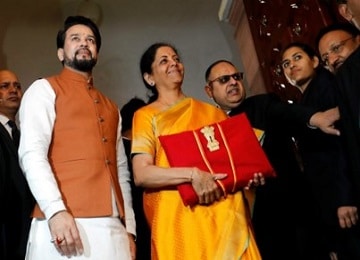 Indian real estate was expecting a lot from the Union Budget 2020-21 and it seems that the Union Finance Minister Nirmala Sitharaman has delivered on some fronts while seemingly skipping some other aspects that were expected. Yet, one has to be practical about the current economic scenario and compulsions of the Government along with the fact that several pro-active moves were already implemented by the Government in the last financial year for revitalization of Indian real estate.

These included the emphasis on affordable housing by granting it infrastructure status and also the Pradhan Mantri Awas Yojana (PMAY) interest subsidies for first-time buyers under the umbrella of Housing for All by 2022. Additionally, the Government also reduced GST rates on under-construction property to 5% and affordable housing units saw GST rates coming down to only 1%. Ready to move properties do not attract any GST.

At the same time, the Government also introduced an additional tax benefit of Rs. 1.5 lakh on home loans taken for buying affordable housing units priced up to Rs. 45 lakh. This would be provided over and above the interest deduction limit of Rs. 2 lakh on interest repayment for home loans. The Government also came out with several measures to encourage investments in second homes in the last Budget along with introducing an alternative investment fund (AIF) of Rs. 25,000 crore for completing stalled projects in the affordable and mid-income categories. This move will bring relief to thousands of home buyers and developers alike. Taking all these aspects into consideration, one might ponder as to what Indian real estate has gained from the 2020-21 Union Budget. Here’s looking at the same.

The Union Minister of Finance, Nirmala Sitharaman, presented the Union Budget 2020-21 on the 1st of February, 2020. This is her second budget in the second term of the present Central Government. The Finance Minister stressed on the fact that economic fundamentals continue to be strong with overall stability at a macroeconomic level. Inflation continues to be restricted while banks were cleaned up extensively in the past before being recapitalized. Companies were also offered exits via the IBC and several formalization measures were taken for the economy.

Now, the Union Finance Minister has come out with a major benefit for the real estate sector in the current budget with a view towards fulfilling the Housing for All mission of the Government. The focus continues to be on affordable housing where the Finance Minister extended the additional deduction on affordable housing loan interest for another financial year. In the last Union Budget, Sitharaman had proposed a maximum deduction of Rs. 3.5 lakh on home loans taken for affordable housing units priced up to Rs. 45 lakh in terms of stamp duty. This meant an additional deduction of Rs. 1.5 lakh over and above the existing threshold of Rs. 2 lakh for home buyers. This was made applicable for home loans sanctioned prior to/on the 31st of March, 2020. The Finance Minister has now extended this date to the 31st of March, 2021.

This will naturally boost the real estate sector by drawing more first-time home buyers to the market in the hope of getting higher tax deductions. Another positive move has been a tax holiday on the profits earned by real estate developers who are building affordable housing projects. This was announced earlier by the Finance Minister and remained applicable till the 31st of March, 2020. In a similar vein, she has now proposed an extension of this date for affordable housing projects and developers by another financial year. This will go a long way towards benefiting affordable housing developers and enhancing their confidence in this fast-growing housing segment.

Other key announcements worth noting

Presently, while income is being taxed from business profits, capital gains and other sources with regard to real estate transactions, in case the consideration value is lower than the circle rate by more than 5%, the difference amount will be taken as income in the hands of the seller and purchaser alike. For lowering difficulties in real estate deals and offering some much-needed relief to this sector, the Union Finance Minister has proposed an increase in the threshold to 10% from 5%. Additionally, the Government has renewed its focus on infrastructure development. It will be investing a whopping Rs. 100 lakh crore for infrastructure development over a period of 5 years.

This will comprise of 6,500+ major projects in sectors like safe drinking water, housing, affordable and clean energy, top-notch educational institutions, healthcare for everyone, modern railway stations, bus terminals, airports, railway and metro projects, irrigation projects, warehousing and logistics projects and more. The National Infrastructure Pipeline has already been launched by the Finance Minister on the 31st of December, 2019 with an outlay of Rs. 103 lakh crore. This renewed focus on developing quality infrastructure throughout the nation will naturally benefit real estate and housing growth across major Indian cities and suburban areas alike. This will also benefit the logistics and warehousing sector and boost overall realty growth simultaneously.

Co-operative societies are highly valued in the Indian economy, playing a vital role in input procurement, enabling credit access and marketing services for all members as per the Union Finance Minister. They are presently taxed at 30% with cess and surcharge. For bringing a level playing field as far as corporates and these societies are concerned, the Union Finance Minister has proposed an option for a tax rate at 22% along with 4% cess and 10% surcharge without any deductions/exemptions. She has also proposed exemptions for societies from AMT or Alternative Minimum Tax like companies in the new taxation system where they are exempted from MAT (Minimum Alternate Tax). This could indirectly benefit the housing sector as well.

Some major steps taken in the Union Budget 2020-21

The Union Finance Minister has also provided some relief to NBFCs or Non-Banking Financial Companies who account for a major source of funding for the real estate sector. The threshold for eligibility for NBFCs for debt recovery under SARFAESI (Securitization and Reconstruction of Financial Assets and Enforcement of Security Interest) has been proposed at asset sizes of Rs. 100 crore from Rs. 500 crore or loan sizes between Rs. 50 lakh and Rs. 1 crore. Boosting NBFCs will naturally ease up funding for the realty sector and developers. At the same time, reforms in personal income tax will play a major role in enhancing demand for real estate and investments.

The Union Finance Minister has proposed a new and optional tax regime where rates of taxation will be lowered considerably for those opting to let go off specific exemptions and deductions. Under this new system, individuals will be paying taxes at a lower rate of 10% for earnings of Rs. 5-7.5 lakh as compared to 20% at present. Those earning up to Rs. 5 lakh are not required to pay any taxes under the old or new regime alike. Those earning between Rs. 7.5-10 lakh will pay taxes at 15% as compared to 20% currently.

Those earning between Rs. 10-12.5 lakh will be paying 20% as compared to 30% currently. There will be major benefits for taxpayers in the new regime, depending on the exemptions/deductions claimed by them previously. People earning Rs. 15 lakh annually and not taking deductions will be paying Rs. 1,95,000 in taxes as compared to Rs. 2,73,000 in the previous regime, thereby equating to savings of Rs. 78,000. The new regime will be optional as mentioned and taxpayers can file taxes under the previous regime if they wish to keep availing of specific exemptions/deductions like they had in the past.

The real estate sector will benefit from the measures announced by the Union Finance Minister in the 2020-21 Budget and measures taken in the past. As per reports, India’s top 8 cities posted 1% of year on year growth for H2 2019 in the residential real estate segment. This marginal growth has been achieved on the back of Government measures although the sector will still take some time to achieve full stability and growth. The AIF and relaxation of rates of GST, according to experts, will benefit the sector majorly in 2020, i.e. the impact of these reforms will be felt more strongly this year.

Real estate project launches have increased by 23% (year on year) as per reports and with improved buying sentiments, the positive momentum should continue. CREDAI (Confederation of Real Estate Developers Association of India) has already stated that recovery in the real estate sector may accelerate growth of the Indian economy since it has future potential to ensure contributions of more than 8% to the GDP (gross domestic product). The Government’s extension of the interest repayment tax benefits for affordable housing loans and exemption on profits of affordable housing developers has been hugely welcomed by experts and industry players.

The announcement of establishing 5 smart cities through the PPP (private public partnership) model will also benefit the real estate sector to an extent along with the proposed 100 new airports across the nation. Growth in infrastructure across Tier-2 and Tier-3 cities will open up more avenues for the housing sector to flourish in future years.

They had also expected the sector to be granted industry status which has not been implemented till date. Some measures for NBFCs will go a long way in easing up the liquidity crisis that the sector is facing currently. They have however lauded the focus on infrastructure development which will benefit real estate and construction hugely along with the reduction in personal income tax rates which should put more money in the hands of buyers. As can be seen, being the predominant growth category at the moment, affordable housing has been given steady attention in the Union Budget for 2020-21. This is but natural, given that the segment has been doing well over the last couple of years and more new launches can be expected in this category. Several leading real estate developers are also shifting focus from prime and luxury segments to the affordable and mid-income segments. This trend is expected to continue in 2020 as well.

Rahul Mishra
« Split Up for Good this Valentine’s Day: Win a Brand-New Car at LBSF 2020!
In major consolidation drive, a few Embassy projects to be merged with Indiabulls Real Estate »

Stress fund for real estate starts disbursal of funds for…