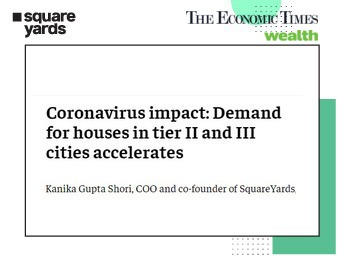 Reverse migration has been a major trend that has pushed up demand considerably for homes across Indian Tier-2 and Tier-3 cities along with factors like ready availability of bigger spaces, lower construction costs, and enhanced value for money in terms of property prices. Top real estate developers like DLF, ATS, Emami Realty, Alpha Corp, and Omaxe have also been emphasizing on smaller Indian cities for monetizing land banks that they had held onto for a sizable duration. In fact, senior executive director at DLF Home Developers Limited, Aakash Ohri, stated that tier-II and III cities have seen high demand owing to higher space, affordable pricing, better investment returns, and low acquisition costs alike, particularly for ready to move in properties.

He added that homeowners are now choosing lifestyles away from the hustle and bustle of metropolises in the post-COVID-19 scenario although they desire all major amenities as well. India’s top 7 cities presently account for a whopping 70% of the residential real estate market with the remainder being taken up by tier-2 and tier-3 cities. Santosh Agrawal, the CFO at Alpha Corp, has also opined that COVID-19 has made buyers realize the need for homes in gated communities, and major investments are not needed for owning homes in Tier-II and III cities unlike in metro cities. He gave an example where traction is superior in Haryana in comparison to Uttar Pradesh (UP) owing to weekend lockdowns in the latter State. Professionals are now looking to buy backup homes in their hometowns currently.

Emami Realty, for instance, is executing a major township in Jhansi with an investment of Rs. 223 crore. Alpha Corp has projects in Meerut (UP) and Karnal (Haryana). Emami has released a study where 70-75% of people in cities like Gwalior, Kanpur, Jhansi, Karnal, Indore, Agra, and Panipat prefer buying independent villas and plots in place of group housing societies/high-rises.

COO and Co-Founder at Square Yards, Kanika Gupta Shori, stated that demand has been increasing rapidly over the last few years in Tier-II cities owing to better employment opportunities, infrastructure growth, and connectivity improvements. Shori has confirmed how searches and inquiries have gone up in comparison to pre-COVID levels for properties in these cities, particularly for buyers who are looking at suburbs owing to budgetary limitations.

DLF is already seeing higher traction for ready to move in units and plots in cities like Indore, Lucknow, Kasauli, Shimla, and the Tri-City (Punjab). Demand has gone up sizably in these cities since they are primary end-user driven according to Omaxe Limited CEO Mohit Goel. The company has projects coming up in Lucknow, New Chandigarh, Indore, and Ludhiana as well.

Nitin Kumar
« How To Use Fairy Lights To Beat The Gloomy Weather?
Genelia and Riteish’s Meri Wali Home Story released by Square Yards »

Demand goes up for larger homes owing to WFH

Property sales soar in Mumbai with reduced stamp duty and…