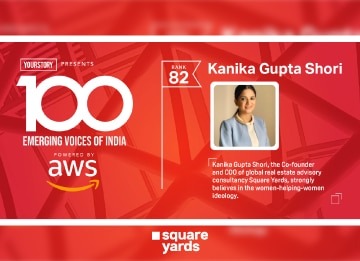 Women should dream beyond one’s imagination and carve a niche for themselves. Rules of failures are same for both men and women, but the rules of success differ.” Kanika Gupta Shori, Co-founder & COO of global real estate advisory consultancy Square Yards, strongly believes in the women-helping-women ideology.

An alumnus of Wharton Business School, also a Level 2 CFA candidate, Kanika questions the glass ceiling effect and women conformity to non-entrepreneurial stints. She believes just following the rules made by society can be easier but pursuing personal desires paves a new way altogether. Kanika pursued her dreams and today she manages India’s largest and fastest-growing PropTech aggregator. For which, she has won several recognitions that include “Young Achiever of 2014” and “Woman Icon of 2017.

Nitin Kumar
« 5% rise in investments forecasted for Indian real estate
Thinking of investing in real estate this year? Here are the top investment avenues for you »

Gurugram ranked as most livable Indian city during coronavirus pandemic

New Model Tenancy Act achieves a balance between landlords and…