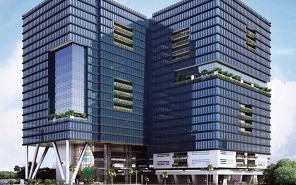 The real estate sector in Mumbai has another big news to savor and it could very well be the largest commercial real estate deal so far this year in the city. The US based private equity firm Blackstone Group Lp has recently acquired a great marquee office building in Mumbai’s prestigious Bandra Kurla Complex for a jaw dropping 2500 crores. The building was owned by Radius Developers and it is an 8 storey behemoth. The One BKC, as it is named is spread across a whopping 7, 00,000 sq. feet and has been fully leased out to the company.

At present, Blackstone is also working on buying out Adani Realty’s 800,000 sq. feet commercial upcoming project named Inspire, which is also located in the same area and it would be priced around Rs 1900 crore. The information has been revealed by two people who work for the development but have requested anonymity.

Key details about the deal

Some of the big names who will move in as tenants in the building would include Bank of America, Facebook and Merrill Lynch, along with Cisco and Amazon. However, representatives from both Blackstone and Radius have declined to comment on the development at the moment. ANARCOK Property Consultants, which had acted as an adviser for this deal has also likewise declined to comment. However, no doubt it is one of the most sought after properties in Mumbai, and is a top leveler, even among its other Grade A property peers. There is also no other building like the BKC which has been let out 100%, especially to a single large multinational company like this.

With the Blackstone- One BKC Deal moving forward, it will also mean that the Indiabulls Housing Finance would also exit the project. Radius had initially taken a massive loan of about Rs 1600 crore from Indiabulls for the development of the office building. The deal with Blackstone had come on an opportune moment which has been on buying one property after another in India to build its very own large portfolio of marquee commercial real estate. The investment might seem like a huge one but with the high profile tenants moving into the building, the revenue generated is going to be huge as well and Blackstone will soon be seeing immense profits.

The company has already invested about $5.4 billion in India, spread over 33 investments in real estate. $4 billion from this has been invested in office assets only. The spree started in March when the Embassy Group, backed by Blackstone had launched India’s first real investment trust or REIT, which was alone worth about 4750 crore INR. The Embassy Office Parks REIT portfolio alone comprises of 33 million sq feet of office space and it is spread across four premium city center office buildings throughout India and seven office parks and hubs, including in the cities of Mumbai and Bangalore.

The home run started in about 2018 when Blackstone had started signing deals with Indiabulls Real Estate Ltd. There were some pretty huge deals in the last one year, one of which was the buying of a 50% stake in two of Indiabulls’ flagship office properties situated in the heart of Mumbai- the One Indiabulls Center and the Indiabulls Finance Centre. The deal was for about $30 million. There was another commercial asset of the firm in Chennai and that too was acquired by Blackstone for Rs 900 crores.

The good news with these acquisitions was that doors were opened to other foreign investors as well and they were soon lining up to buy other A grade properties in the city. Global private equity firms like Canada’s Brookfield Asset Management and Canada Pension Plan Investment Board or CPPIB, and independent wealth funds like Singapore’s GIC Pvt Ltd, are some of the names amongst others. It is no secret that all these names are trying to bank on the capitalization of such growing demand for commercial spaces in India. Knight Frank, a real estate advisory firm, has stated that office rent in Mumbai and Bangalore saw a rise by 17% and 5% respectively in merely six months, compared to Delhi 1.4% in rise of rental revenue in prime office markets. This would be bringing a number of opportunities to the cities and pave the way for future developments. And this is all the more heartening after a slow 2018, which saw an undersupply in the commercial markets of both the cities. The demand from technology firms was also quite high.

It is estimated that the deal from Blackstone is just the beginning and this would pave the way for other future investments in the city. The numbers would speak for themselves and it would be a new chapter in the real estate sector of Mumbai.

Resident Editor
« Proposed metro expansion can spark rapid growth in Gurgaon if done right
Should you purchase a ready to move or under construction housing unit or even resale property? »

Andheri East & Jogeshwari East on the path of a…