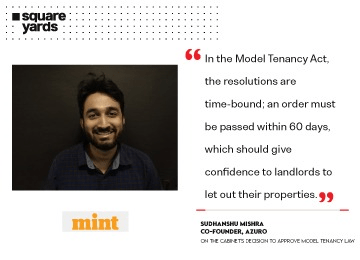 The Model Tenancy Act, 2021 was approved on the 2nd of June by the Union Cabinet and has balanced the whole system between tenants and landlords as per industry experts. States already possess laws dealing with leasing and renting properties and the MTA will be swapping the current Rent Control Act of the States, if it is adopted by them. According to experts, the Rent Control Act is tilted in the tenants’ favor and States have attempted to bring both parties on a level playing field by modifying current laws although the MTA will be a better option according to them. States will have powers for modifying the MTA or not adopting the same at all in the future.

Some experts feel that the MTA being part of the Concurrent List, is recommended for implementation to States although it is not compulsory. It is more like a guideline on policies for States and this is why it merited approval of the Union Cabinet and not the Parliament. RERA deals with protection of buyers without directly tackling property laws. Hence, it was passed in the Houses of Parliament. The MTA necessitates establishment of a rent authority in States for regulating the leasing/renting of premises. Once the tenant and property owner sign the leave and license agreement, they will have to intimate the authority within a period of two months. The proposed authority will be issuing a unique ID and will take decisions if there are disputes based upon submitted facts. States will also have to establish rent tribunals and rent courts for dispute resolution.

Landlords have had major concerns regarding squatting, with many keeping homes locked instead of renting them out on this account. In a few States such as Maharashtra, it is compulsory to get leave and license agreements registered under the Government. Still some time is required to get relief from courts as far as landlords are concerned, in case tenants do not leave the property. The MTA has a time period of 60 days for passing the order and this will give a host of confidence to landlords with regard to renting out their properties as per the Co-Founder, Azuro, a subsidiary of Square Yards, Sudhanshu Mishra, that offers property management and rental solutions.

Other experts feel that rent authorities will be handling a far higher volume of cases than those falling under the purview of RERA. There is no standard practice for security deposits in India. Chennai and Bengaluru, amongst other southern cities, may have 6-10 months as deposit period while it is 2-3 months for Delhi. Standard deposit timeframes will help in bringing about a level playing field for tenants as well. The Act limits the deposit to two months of rent for residential properties while this is a maximum of six months for non-residential properties. Sudhanshu Mishra also feels that landlords may perceive ample security deposit as their sole leverage although there are other Model Tenancy Act provisions which offer higher power to them as compared to the existing laws.

Most disputes crop up at the time of the tenant vacating the property as per industry experts. The Act offers multiple scenarios for handling disputes whenever owners want tenants to vacate the premises. Landlords may get compensation if there is adequate notice given to the tenant regarding the terms and conditions in the agreement but the latter does not vacate the property. This is double of the monthly rent for two months and four times of the monthly rent afterwards. If any force majeure applies like a natural calamity or any unprecedented scenario, owners should allow tenants to retain possession for a month post the cessation of any such incident.

Experts feel that implantation of RERA throughout States had challenges since developers did resist it initially. There are no such powerful lobbies in case of the MTA according to them. Both landlords and tenants want to have their rights secured and want swifter implementation above all else. Hence, more States may implement the MTA even faster than they implemented RERA according to several experts. The Act extends solely to new agreements although some opine that earlier agreements between tenants and landlords should have been covered for truly enhancing overall confidence in the same. Some also feel that the Act should also have clearly laid down the role played by property brokers in these transactions while laying down the minimum compensation to be received by them.

This is the best time for end-users to buy their…