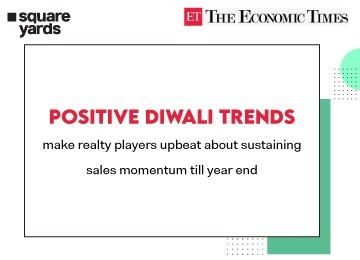 Real estate developers in India are anticipating the continuation of sales-related momentum that was seen in the Diwali period, to sustain till the end of the year. The take-off was considerably better for housing units than expected, over the last one and a half months. Several factors contributed to the same including a higher number of market discounts, the release of pent-up consumer demand, and several encouraging moves of the Government.

Several developers have confirmed that sales volumes have been even better than the previous year for the Diwali season and they are now feeling more confident about stronger demand over the next few months if they retain their offers and discounts. AlphaCorp CFO, Santosh Agarwal, has stated that in the Diwali season, more than 50% growth was seen in sales queries as compared to the previous year. Initiatives taken by the Government for infrastructure development have paid off along with several people shifting to their hometowns, thereby spurring growth in overall housing demand according to him.

Leading online brokerage firm Square Yards also stated that property transactions saw growth of 5% (year on year) for the recently concluded quarter in comparison to the industry-wide sales dip of 50%. COO at Square Yards, Kanika Gupta Shori, stated that in the week of Diwali itself, more than 4,500 prospective home buyers walked in and made bookings for more than 350 properties right on the spot through the payment of the whole booking amount (not only EOIs). This led to GTV (gross transaction value) surpassing Rs. 225 crore according to Shori.

Industry watchers have opined that the festive period offered strong relief for the sector with several developers posting stronger sales figures and managing to stabilize their cash flows. Experts feel that despite multiple challenges, there are still buyers who remain interested in property purchases. In a way, the pandemic has enhanced the importance of homeownership and this has been reflected in sales volumes throughout the festival period.

FY21 concludes on strong note for Square Yards with $50M…

Demand soars for residential plots amidst COVID-19- The key reasons…