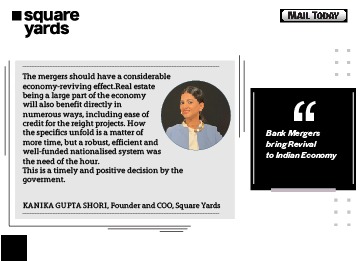 Industry experts are upbeat about the recent public-sector bank mergers as a milestone decision for Indian economy. For realty sector, they believe the lending capacity of banks will increase, which will help the sector fight with ongoing liquidity crunch. Kanika Gupta Shori, Co-founder and COO, Square Yards, points out her opinion in an article published by Mail Today.

The article quotes her saying, “The mergers should have a considerable economy-reviving effect. Real-estate being a large part of the economy will also benefit directly in numerous ways, including ease of credit for the right projects.” She also mentions how the specifics unfold is a matter of more time but a robust, efficient and well-funded nationalised banking system was the need of the hour. “This is a timely and positive decision by the government,” Shori adds.

Nitin Kumar
« Why Real Estate is Safer in Comparison to Equities
Is Govt of India’s financial stimulus enough for Indian Real Estate Inc? »

Why do buyers prefer ready to move in properties?