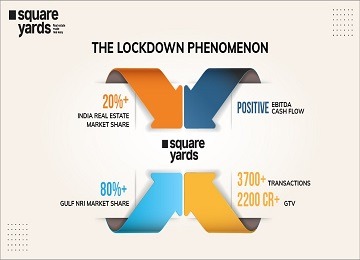 India’s foremost proptech player Square Yards has confirmed more than 3,700 apartment transactions between March and June, from the commencement of the nationwide lockdown. These transactions account for GTV (gross transaction value) of Rs. 2,200 crore and the numbers are vital since going by various reports and news bulletins, the housing market fell by 2/3rds in the leading 10 Indian cities in the quarter between April and June.

Square Yards achieved close to a whopping 20% of market share in terms of overall realty sales in this duration. To put it simply, every 5th property sold in India was from Square Yards while overseas buyers and NRIs contributed a handsome 60% of overall GTV and close to 50% of deals in this period. Square Yards was able to control close to 80% of the NRI market in the Gulf, a sizable feat during these tough times.

Growing at a scorching pace, Square Yards also managed to turn cash flow positive on a month on month basis. It has been profitably operating on the basis of EBIDTA over the last few quarters as well. This makes the company one amongst a rare breed of consumer-tech Indian startups which are profitable and growing fast along with having ample sustenance on the basis of internal cash flows.

The CEO and Founder at Square Yards, Tanuj Shori, stated that the biggest lockdown in the world, in India, was feared to be the final disruptor for the realty sector although it has turned out to be a blessing in disguise for the company. He also added that the company will be unlocking various new mandates in the near future along with launching several exciting products across the proptech management and fintech space in the present quarter.

53% of transactions in this period took place in India, contributing 40% to the GTV while the remainder was from overseas/NRI buyers. Square Yards has built an invincible presence in the NRI category, having its presence in more than 9 countries. Most buyers purchased real estate for investment, spurred by enticing payment plans structured by Square Yards in close association with real estate developers.