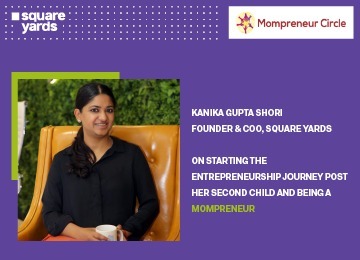 Kanika Gupta Shori, the Founder and COO of Square Yards has crafted a journey that is nothing short of inspirational and fascinating. She started India’s foremost real estate platform after the birth of her second child. It is today the country’s biggest real estate mortgage and brokerage marketplace. She feels that it is vital to keep listening to one’s intuition while creating ample space for all feelings while making self-care a major habit.

It all started when she accompanied her husband Tanuj Shori to a party. At this time, her second-born was just 6 months old. Many people asked her at this party as to her career plans. She kept avoiding the questions by replying that motherhood was taking up all her time. However, Shori confesses that deep down, she always felt that this was only an excuse. She then became determined to avoid making her children an excuse for not possessing a fulfilling career. This led to the establishment of Square Yards. Tanuj and Kanika were interested in investing in Indian real estate as an NRI couple residing in Hong Kong in 2014.

They discovered that there was a pressing need for a non-biased and independent real estate advisory service. This was needed for handholding buyers throughout the entire discovery and search procedure along with taking them through the entire purchase process smoothly. The couple invested their savings, giving up all their assets under ownership. Tanuj Shori also joined full-time sometime later post quitting his job. He started taking care of business development while Kanika Gupta Shori took care of HR, processes and operations. With the company being run from Hong Kong, there were several challenges at hand. Square Yards was a new entity and received negligible acceptance from real estate developers. To overcome this problem, the company shifted to India and started opening offices in numerous cities while deploying sales force and ground staff alike.

On-boarding skilled talent and building a good team was another major challenge. The couple realized that they had to build people who will in turn build the business. They compared existing talent pools throughout India while opting for more intensive searches for building a star-studded team. Scaling up a model was tough in a sector where several startups found early growth but ultimately failed. Kanika Gupta Shori has also highlighted the support and strength received from her husband and Co-Founder, Tanuj Shori. Her family has helped in maintaining the balance between her children and work commitments. In spite of traveling 7-15 days every month and covering the vast geographical network of Square Yards, Kanika has always maintained proper work-life balance till date.

She has built a robust routine-based system for her children which goes on irrespective of whether she is present at home or work. Planning and organization are two key aspects in this regard. She tracks all school activities and after-school activities impeccably while ensuring that routines are running smoothly. She maintains communication constantly with her children, talking about minute details of their lives. She also shares details of her work with her children and how she loves every minute of what she does. She has also talked of aiming to achieve 15-20% market share in every vertical at Square Yards along with market share of 20% in the primary residential distribution category. The company wishes to become the biggest integrated property solutions platform, offering everything real estate as per Shori.

She also opines that women should plan ahead and organize for swiftly getting back into work mode. Small steps are always better to keep in touch with the workplace and to remain prepared for rejoining. She also advises clear communication with spouses regarding sharing of responsibilities. This will ensure more sanity in to-do lists and day-to-day life alike. This will also ensure that all work-linked objectives become more achievable, irrespective of how tiny they actually are.

Nitin Kumar
« Why the world’s ultra-rich is keen on investing in real estate amidst the pandemic?
Penchant for healthy living driving Luxury Property market, sales at its zenith »

Gurugram ranked as most livable Indian city during coronavirus pandemic

New Model Tenancy Act achieves a balance between landlords and…