Home » Buyer's Corner » Everything you need to know about “FSI”

Everything you need to know about “FSI” 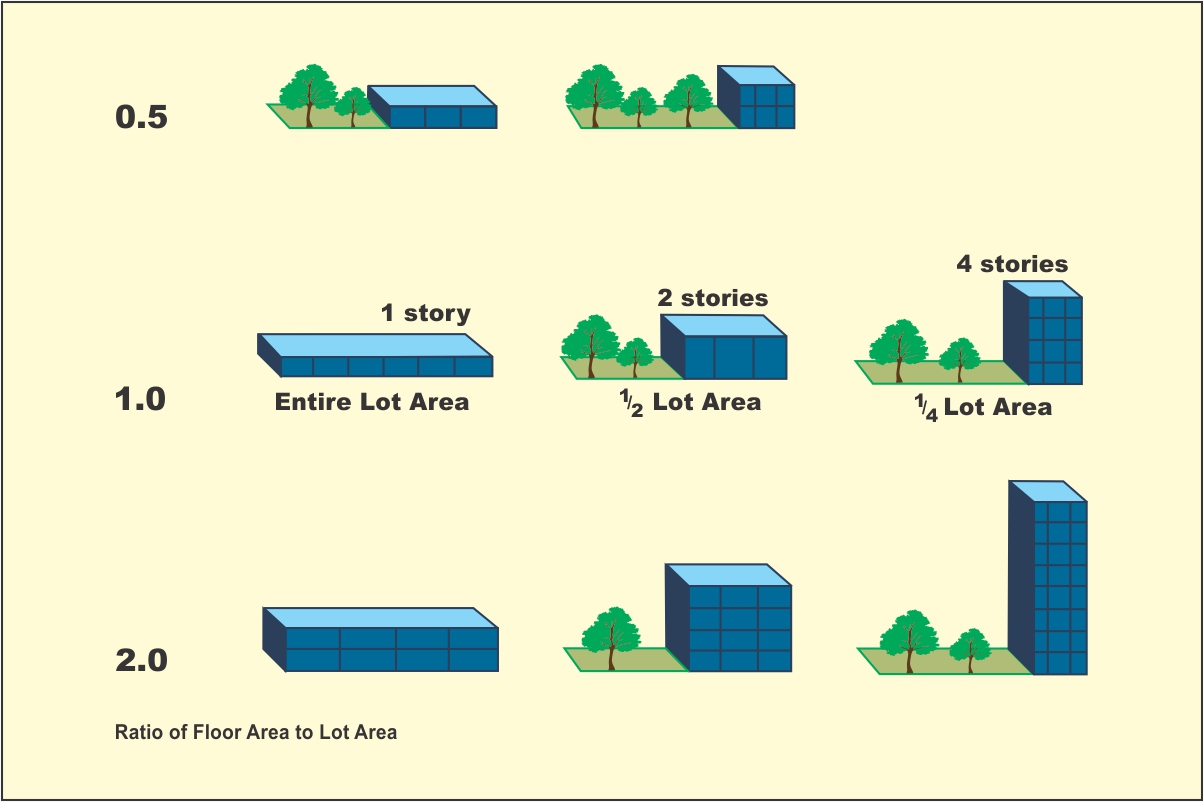 Floor space Index or FSI is truly a mystic number in Real Estate across the world. Basically this number denotes the upper limit to the built space you may construct on a given plot, It is the ratio of allowed built-up area to the plot area. Thus FSI directly impacting how much a developer benefits from a particular land parcel.

Floor area ratio = (total covered area on all floors of all buildings on a certain plot, gross floor area) / (area of the plot)

An architect can plan for either a single-story building consuming the entire allowable area in one floor, or a multi-story building that rises high above the plane of the land, but which consequently results in a smaller footprint/floor plate than would a single-story building of the same total floor area.  (As shown in the Image). Certain types of spaces, such as basements, parking areas, and utility rooms, are exempt from FSI, which means that they do not need to be counted in the FSI calculations. By combining the horizontal and vertical limits into a single figure, some flexibility is permitted in building design, while achieving a hard limit on at least one measure of overall size. The Floor Space Index is dictated by the government through its authorized agencies. It varies from Location to Location, and is also transferable from one area to another.

A post-World War II innovation from America introduced a new form of building control. This is called FSI (Floor Space Index) in India and FAR (Floor Area Ratio) everywhere else in the world. It is the ratio of built-up area of all floors on the plot to the area of the plot itself. The FSI regulation was welcomed by architects as a new breed of FSI friendly Architects were born, they liked the design freedom to reduce the footprint of the building and increase the number of floors, while still observing the FSI rule which sets the total built-up area allowable on each particular plot. But from the authorities’ point of view, the FSI specified has to be carefully managed to ensure that the extent of built-up floor space permitted in a locality does not exceed that locality’s infrastructure capacity, in regard to water supply and sewerage of course but, more importantly, in regard to transport and crowding on the streets.

Difference between FSI and Fungible FSI

The word fungible – from the latin root fungiblis – describes something that acts as a replacement for something else. The municipal corporation of Mumbai introduced this system to curb misuse of existing building regulations by developers. Developers would build space over and above the allowable FSI by the means of some grey areas in the building regulations. These grey areas centered on things that were free of FSI, or not counted in FSI calculations, such as flower beds, services shafts, and balconies. In the fungible FSI system, the allowable FSI on a plot is increased by 35%, with a maximum cap on the total construction area, with no exemptions. This serves to reduce ‘overbuilding’ on plots by developers. The fungible FSI seeks to act as a replacement for or a legalization of the misuse of regulations, but with a clear mathematical limit that should not be exceeded. As of 2015, fungible FSI is applicable to all plots in Mumbai with the exception of those that fall under Coastal Regulation Zone (CRZ) limits.

Current status of FSI in Mumbai

The Floor space index in Mumbai varies depending on the development ensued upon. Generally an FSI of 1.5 – 1.6 is considered in the island city, and FSI of 1 in the suburbs. However for redevelopment, slum rehabilitation, making common recreational areas, construction low range apartments etc., the Government helps compensate the builder by providing additional FSI, so that the developer can benefit out of rehabilitating old constructions, making more public usability areas etc.  Developers can also buy an additional FSI by paying premium to it, so as to build dry areas, flower beds etc.

The Development Plan 2034 has come up with maximum permissible floor space index (FSI) for each plot area in Mumbai. Realty players have welcomed the Municipal Corporation’s proposal to increase floor space index (FSI) up to 8 in the Development Control Rules to be applicable till 2034. The permissible FSI will eventually increase as per the locations with better infrastructure connectivity, accessibility, area’s future potential, its proximity to transit stations and the existing levels of FSI consumed.