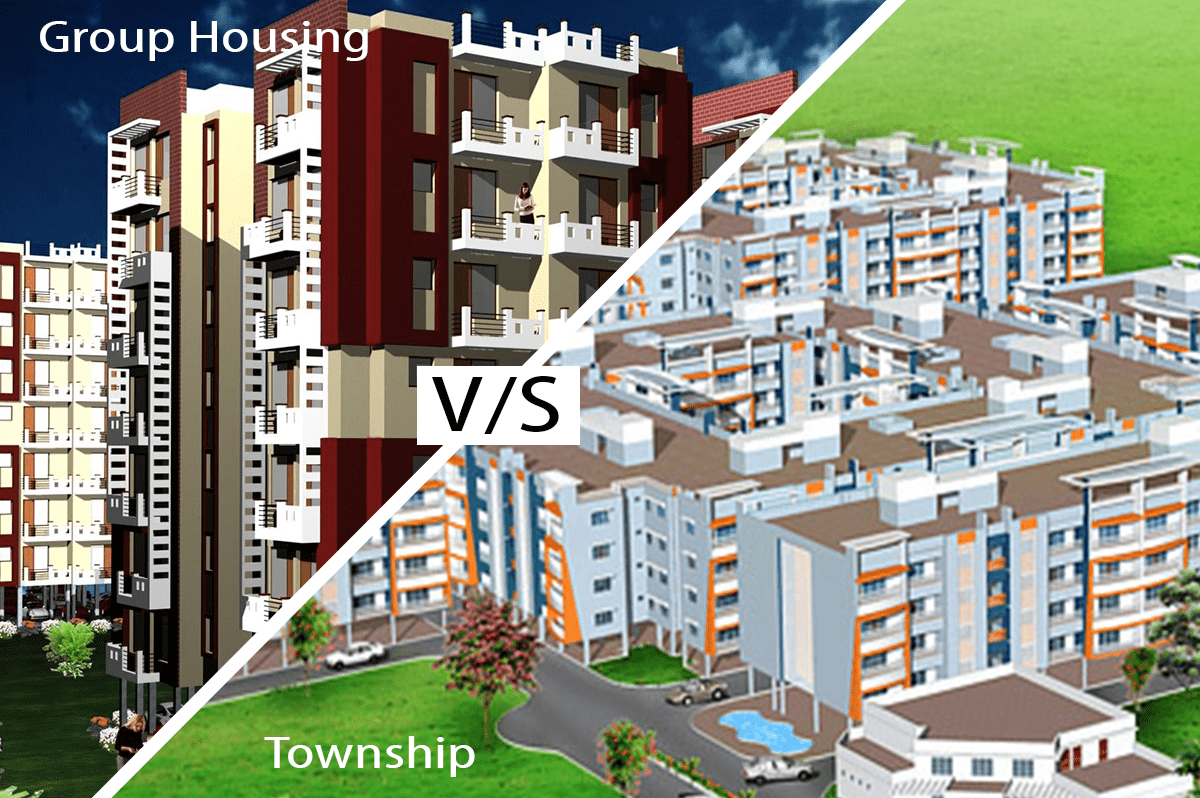 Similar to other markets, there are a lot of jargon’s floating around in the real estate world. In this post we shall try and decipher the meaning and implication of two such jargon’s, that are doing the rounds in these days. One is the ever popular, liberally used term township. The other is a lesser known one called group housing.

Lets start with the lesser known term, group housing. By definition, group housing refers to a residential project built on a land parcel. The term came into limelight after the Haryana Urban Development Authority (HUDA) launched the concept around the developing NCR region. Under the scheme, out of over 500 plots of half-acre each, a certain percentage has to be reserved for the economically-weaker sections, central government employees and defense personnel.

Initially only housing societies like Indian Railway Welfare Organization (IRWO) or welfare housing organizations were allowed the license to build on the land allotted by the HUDA. However, today we have companies like DLF, India bulls getting Group Housing licenses allotted to them under the Group Housing scheme.

According to an article in The Indian Express, Group Housing licenses carry with them both incentives and penalty clauses in the construction of flats. For e.g.,  If the construction is completed within three years of the date of offer of possession, a rebate of 10 per cent on the price of land (adjustable towards the future installments) shall be given. However, if construction is not completed within five years, an extension fee will be charged for the extended period. A fact that should be a cause of jubilation for most investors.

Now, coming to townships, the format is very different and not so different at all. Townships are similar to group housing in terms that they offer a cluster of living space with amenities like schools, retail shops, good roads, gardens, etc. to the end-user. However, as the format of a township is not engraved on any legal paper, nor is there any government involvement in its development, the final product is much more impressive than the group housing one.

Generally, a township is built by giant corporations like Infosys, L&T, etc. to fulfill the residential needs of their employees. It is not a thumb rule though. Many developers simply build townships inclusive of commercial structures as well. However, the amenities that most of these gated communities provided are par excellence and much more than that of a group housing project. Facilities like schools, hospitals, shopping malls, gymnasium, health spa etc. are a norm.

Another difference is that unlike Group Housing projects, the Township projects are not subsided & no preferred land allotments by the government is provided to them. Also, a group housing project will have a detailed plan in place and has to meet certain criteria to be recognized under that label. As a township is under no such obligation, one can already see a cluster of buildings calling themselves townships coming up anywhere and everywhere.

Our verdict? Both of them have their merits and the decision can be based solely on your requirement. While a group housing project will provide you with an assured home with decent amount of amenities, a township can provide you with a high standard of living and a better social infrastructure.