Home » Buyer's Corner » Has the new Union Budget been positive for the real estate sector?

Has the new Union Budget been positive for the real estate sector? 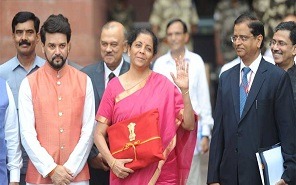 In the last five months till the interim budget was declared, the economy of India had deteriorated even further and the growth rate has been almost negligible. Naturally, there were high hopes among the corporate houses that the first Union budget in Modi government’s second term would have something promising.

The real estate and the infrastructure sector have always been the core sectors in a developing country such as India and although they contribute much to the GDP of the country and have contributed significantly in the creation of employment in the past, these two sectors also have a number of challenges to put up with. They suffer from liquidity crunch, lack of proper equity and unsold inventory, along with mis- match of asset liability among others. The Finance Minister has now stressed in her first maiden budget speech that building physical and social infrastructure would be a top priority.

To that effect, a number of new policies have been introduced that will give the much needed boost to the infrastructure sector and will also enable the government to achieve the high growth rates that are needed to realize the vision of making India a $5 trillion economy. Hence, now the government’s aim is to encourage all forms of infrastructure including roads, rivers, aviation, power and railways. Likewise, a number of proposals have also been made to make this a possibility which includes greater thrust on comprehensive restricting of the National Highway Program and then using the rivers more for cargo transport. Then the PPP in the railway sector and the modernization of the Indian railway station is also on the cards. Then, there would be FDI liberalization in the aviation sector as well and there is going to be focus on “one nation and one grid” for the power sector. There would also be more stress given to the development of gas grids, water grids and i- ways and regional airports. In all, the government has planned to invest about Rs 100 lakh crore in the next five years in the infrastructure sector.

On the other hand, to encourage the financing options in the sector, a number of liberalization measures were also proposed in the corporate debt market and foreign investors can also now subscribe to the debt securities that are issued through REITs and InvITs. The Finance Minister had also announced a number of plants for the introduction of new rules to promote rental housing and a model tenancy law. Land parcels which have not been utilized fully and which are still owned by the government or indirectly through the PSUs will be better utilized. Joint ventures would be encouraged to monetize such land parcels and they will be used for affordable housing and contribute to the growth of the real estate sector.

There have been tax benefits declared for those who would be investing in affordable housing. There would be an additional interest deduction of Rs 1.5 lakhs for the individuals, which is in addition to the existing deduction of Rs 2 lakhs on the loans taken to buy affordable homes. The Section 80 IBA of the India tax laws would also be aligned with the new GST Tax to remove any discrepancies. Other measures include tax consolidation and rationalization of section 14A and of REITs and InvITs so that many lags in infrastructural and real estate development can be done away with.

Where Do the NRI’s Invest in India?

When should you invest in properties?