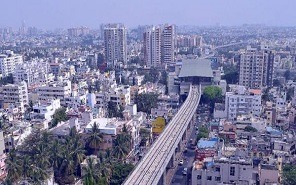 Karnataka is one of the biggest future hubs for the Indian real estate sector. Developers here may soon be singing happy tunes since demand in the State has increased by a whopping margin from investors and homebuyers. There should be another major boom for the State over the next few years, particularly in the 2019-20 period. The realty sector covers the residential housing, commercial, retail and other segments and is one of the major employment drivers in India.

CREDAI, the Confederation of Real Estate Developers Association of India, one of the apex bodies for the industry in the country, has already released its report, stating that India’s realty sector has been seeing growth slowly albeit steadily over the last few years. In spite of several market fluctuations, real estate continues to be one of India’s biggest sectors and this has been particularly witnessed in Karnataka.

Karnataka is expected to see a huge boom for real estate by the year 2020. Here are some of the key factors worth noting in this regard:

Real estate growth in Karnataka is being driven by the ITeS, IT and start-up sectors which are driving higher business not just throughout the State but also across India. Over the last 3 months or so, close to Rs. 46,000 crore has been invested by foreign investors in the stock market as per reports. Bangalore and other parts of Karnataka will also witness high investments in the future, particularly from NRIs as per reports.

CREDAI has also appealed to the government for sanctioning plans swiftly along with other approvals within a particular time period for scaling up overall speed of projects which mostly requires anything between 4 and 8 months. Other experts feel that senior living, co-living and co-working spaces are the segments which are driving growth in the realty market and these green shoots may evolve to become major market trends in the next few years. Bangalore is already witnessing a new group of buyers who are more interested in rental homes with services provided. This is another future growth avenue for the sector since it will naturally accommodate these evolving requirements.

Bangalore is already witnessing several premium real estate projects spanning multiple categories and price points. Some of the top projects here include Pashmina Lagoon Residences, Pride Green Meadows, Shriram Codename Treasure Island and Mahaveer Palatium to name a few. The Bangalore realty market should certainly witness further growth of the IT and ITeS sectors and its status as a big start up hub will lead to further commercial progress which will naturally rub off positively on the residential real estate market. This will be accompanied by infrastructural growth which will also benefit the sector.