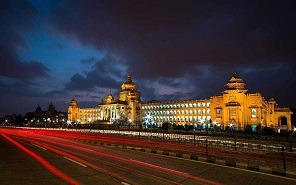 Bangalore had risen to prominence in the last decade, ever since it became a major IT hub in the country. It was always an idyllic city, with perfect weather conditions and lots of greenery and with a history of its own. The traffic was sparse and it was known for wonderful villa styled homes. All of this started changing with the IT boom of the city and suddenly it was the fastest growing metropolitan. Today it is among the top cities in the country and also has the youngest population. Youngsters from all over India have now moved to Bangalore as it is one of the most thriving cities with huge employment opportunities. It is also home to the head offices of some of the top business houses and IT companies and most of the start ups in the country have risen from here. The city has seen a phenomenal rise in the past decade and hence it is no wonder that Bangalore has now been listed among the top five preferred markets in APAC. It has seen the launch of the first Real Estate Investment Trust or REIT as well. The city has received its present honor on the basis of investment that is currently pouring into it because of its current global reputation which is growing across the world.

Bangalore is where the action is

At present, Bangalore is ranked among the top 10 Asia Pacific cities that are attracting cross border investments in real estate. This data was released by a leading consulting firm and India’s tech hub has seen real estate investment doubling in a year. From Rs 5600 crore, it had gone up to Rs 11,200 crore in the span of 2017-18 to 2018-19. According to several experts and industry players, this is a major surge which few cities in the world has seen.

Moreover, the interest in Indian real estate had gone up after the Central Government had passed a law in 2014 to set up the REIT and this has brought the much needed transparency needed in the Indian market. Bangalore had become one of the top five markets in APAC after Embassy, a city based property developer and global equity firm Blackstone set up the first REIT in March 2019. It was a joint venture, the first of its kind in the Indian real estate, and paved the way for many more international investments in the city.

Why Bangalore is benefiting in recent times

The main reason behind such phenomenal growth is definitely the new infrastructure that is being offered by the city and the potential growth opportunities in the market. The investments have improved in office buildings and commercial spaces and real estate developers here are concentrating on constructing A grade buildings which can be rented out to companies at premium rent or sold at top prices. With demand for such buildings skyrocketing, the spaces are sure to be sold out making it very lucrative for the developers.

According to experts, Bangalore now figures as the top Indian city in the list of the preferred investment destination in India and it is currently enjoying huge popularity in trans- national and multinational firms. It was already a strong talent base for premium infrastructure and offered investment grade options in retail, residential and office spaces and the numbers have only increased in the last couple of years.  The interest among investors is clearly in the office properties, to be followed by industrial and logistics, and then by multi family, hotel and retail for investment in the APAC region.

It has been seen that there is much scope for investment in India because it is a country of rising consumption and growing demand. The logistics sector is also fast developing and new population is flowing into the city to seek new opportunities. The city has seen a sea change in the past decade and with global IT industries, manufacturing, pharmaceuticals and other sectors pouring in, it is difficult not to take notice of this city. Even Indian investors are lining up to invest here and it has provided itself a ground of contest as more and more players are trying to have their share of the realty pie, thereby contributing to its overall growth and development.

Resident Editor
« Should you purchase a ready to move or under construction housing unit or even resale property?
What is capital gains tax on sale of property and how do you work it out? »