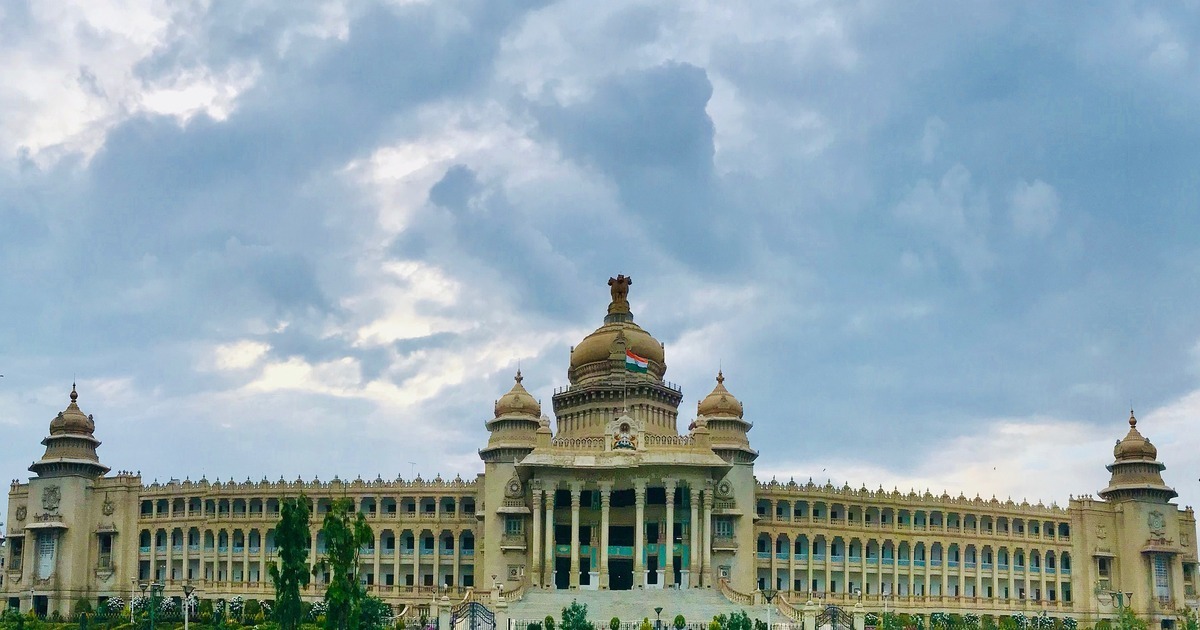 The well-known legislative assembly building in Bengaluru is the iconic Vidhana Soudha.  Never before had a legislative building been the main landmark of its capital city. The Karnataka State assembly is today proud to be seated in a tourist destination that in many ways, is as majestic, if not better, than the iconic Capitol Hill Building that houses the senate of the United States of America.

Kuvempu’s poetry in stone was intended to outshine the athara kacheri or the high court of Mysore state. The athara kacheri had been designed and built by the British and, as work on the new imposing building progressed, the incoming chief minister Kengal Hanumathaiah wanted to give it a distinctive Indian touch. His vision was backed by the nationalistic ideology of a people just liberated from the condescending rule of colonialism.

Chief Architect B.R.Manickam would probably never have envisioned that he was designing an iconic building that would be the best legislative building of any state in India. Mysore became Karnataka but the Vidhana Soudha continued to be a beacon of creativity that would make the team of the chief architect and Hanumanthai Rao Naidu along with Chief Minister Kengal Hanumathaiah immortal.

There is an interesting anecdote that drove Hanumathaiah to turn architect. A lawyer by profession, he was disturbed after a team of visiting Russian delegates to Bangalore commented that every building had a European look. That casual remark drove the future chief minister to literally make history.

This grandly conceptualised building stood slightly elevated and almost seemed to be looking down on the High Court which had overseen the turbulent times of transition from an era of bitter struggle to new horizons of endless opportunity. The Vidhana Soudha stands today as a proud testimony: a legacy to be proud of.

Chief Minister Hanumathaiah strategically placed his new dream project just opposite the athara kacheri and erected its central dome to a towering 55 metres. His palace of the people was a show of Indian ingenuity and creativity. The amalgamation of neo-Dravidian templates with a combination of Indo-saracenic and European design styles would literally become inimitable and still stands in a silent salute to its creators. The prisoners from the jails of Tiruchirapalli and Karaikal (now Puducherry), even in bondage, created the biggest wonder from the creativity that freedom brought.

The present valuation of the 60 acre (2613600 sq. ft) campus land alone is Rs 3920 crores at the average land rate of Rs 15000 per sq. ft. The actual value is much more if the cost of the building and its historical value were to be taken into account.

History of the State and the legislative assembly

Bangalore first became the capital of the state of Mysore in 1831. The capital got its first administrative building in the form of the Bangalore Fort palace and remained there until its condition deteriorated and had to be demolished in 1868. The administrative office had to be shifted to the Cubbon Park Public offices building.

This public offices building would later be renamed the Athara katcher , meaning the 18 courts for the 18 departments the state of Mysore had back then. There was a brief period of change of place when the administrative machinery moved to Mysore when the state headquarters were moved back to Mysore.

The assembly in Mysore had 144 members and would meet in the Jagmohan Palace. The legislative council was founded in 1907 with 50 members with the objective of assisting and strengthening the administrative machinery in Mysore. While the assembly sessions continued to be held in Mysore, the budget session began to be held in Bangalore at the town hall.

After independence, Bangalore once again became the capital of the princely state of Mysore and the entire administrative machinery moved back to Bangalore. The favourite Athara katcheri once again became the venue and the state assembly began to be held in the library hall of this grand old building until a separate hall was built on the third floor and both the assembly and the legislative council moved to the third floor.

The joint meeting of both houses of the assembly was, however, held in the town hall with the Maharaja of Mysore presiding over the meeting as Rajpramukh.

By then, repetitive shuffling of venues for the assembly and legislative council meetings led to a strong need for a separate seat of government for the new state and by 1948, the chief engineer of the state was commissioned to plan a new building for the state legislature.

By 1950, the country had become a Republic and, with it, came some changes in the form of governance. The Mysore Legislative assembly was formed. It was a bicameral legislature with a Vidhana Sabha and a Vidhana Parishad.

The stage was set for the first chief minister of the state, KC Reddy and his cabinet to plan and execute their ‘house of legislature. The team of architect B.R. Manickam and his assistant were commissioned to plan and design the house of the legislature. There would be an assembly hall for 200 members and an audience gallery of 500 visitors. By April 1951, plans were ready and it was time for Prime Minister Jawaharlal Nehru to lay the foundation stone.

It was not until 1952 when Hanumathaiah became the second Chief Minister of Mysore that the shape that would become the Vidhana Soudha began to metamorphosise. The Russians would come and history would be made when Hanumathaiah would decide to amalgamate the indigenisation of his Legislative building with neo-Dravidian styles to create a masterpiece. The rest is actually history.

There was another event that led to an upscaling of the original design. This was an event that would prove crucial in the change of the design of the Vidhana Soudha. In November 1956, the state of Coorg and the Kannada speaking regions of Hyderabad, Madras, and Bombay were combined and the state of Mysore grew bigger. This obviously led to a larger number of people’s representatives and the number of assembly seats grew from 99 to 208, more than double.

This change of assembly seats led to the need for the house of legislature to be bigger than originally planned and by then chief minister Hanumathaiah had toured the country in search of new ideas to incorporate into his dream project. The increase in the size of the assembly proved a blessing to him as his project cost had increased to Rs 1.75 crores from the original budget of Rs 50 lakhs.

The athara kutcheri would go on to become the high court of the state. There were some modifications but it largely remains the British-designed building that the Vidhana Soudha faces as an indigenous symbol of pride.

In the year 1973, the name of Mysore was changed to Karnataka and became the state that it is today.

When Prime minister Jawaharlal Nehru laid the foundation stone for a new Mysore state assembly on 13 July 1951, he and his joint partner in the inauguration, chief Minister K.C.Reddy, would never have imagined that they were helping create a new iconic building, that, when completed in 1956, would become one of the greatest landmark buildings of India and one of the heritage buildings of the world. Though Prime Minister Nehru called it a ‘temple dedicated to the nation’, the Vdhana Soudha is today everything the dignitaries of that time referred to it as. It has become the People’s Palace for not only Hanimanthaiah but the entire nation for eternity.

The ‘Poetry in Stone’, as affectionately named by poet laureate Kuvempu, The Vidhana Soudha was built with granite and marble. There are 12 columns 12 metres tall. This project was the brainchild of Kengal Hanumathaiah, the second chief minister of Mysore.

The work of 1500 sculptors and 5000 labourers, overseen by 10 jail wardens, culminated in the “an exemplar of a revivalist building of the era”, a fitting description coined by John Lang in his book ‘Concise history of modern Architecture in India”. Built at a cost of Rs 15 crores in those days, this granite masterpiece is today valued at Rs 3920 crores.

How many floors does the Vidhana soudha have?

The Vidhana Soudha has 4 floors above the ground and one floor below ground level.

What is the Vikasa soudha?

The Vikasa soudha is an annex to the Vidhana soudha that was built by Chief Minister S.M.Krishna in 2005. It is a smaller replica of the Vidhana Soudha. Another similar structure named the Suvarna Vidhan Soudha was built in Belgaum and houses the second secretariat of the state.

How many rooms does the Vidhana Soudha have?

The Vidhana Soudha has 172 rooms. The biggest of these rooms is the Chief Minister’s office.

What is the address of the vidhana soudha?

The address of the Vidhana Soudha is Ambedkar Bheedhi, Sampangi Rama Nagara, Bengaluru, 560001.

Can I get a pass to visit the Vidhana soudha?

Yes. You can visit the Vidhana soudha with special permission due to security reasons. You can visit the Vidhana Soudha on weekdays except for holidays between 10am to 5pm. There is a counter near the main entrance from where you can get tickets to enter the building. There is a place where you can deposit baggage and sensitive items which could pose a security risk.

Samarjeet Chauhan
« GIFT DEEDS: A COMPLETE GUIDE
A guide to the details of E-Sampada Chandigarh »