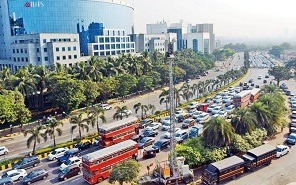 Mumbai has always been attracted real estate developers and investors and it has one of the highest real estate prices not only in the country, but also in the world. Owning a property in Mumbai requires a quite a budget. There are many prime pockets in Mumbai and in suburbs and lately the BKC or the Bandra Kurla Complex is attracting investments like never before. It is finally giving a stiff competition and even going past the prime South Mumbai hotspots like Nariman Point and Lower Parel, considered to be some of the most high profile regions of Mumbai in terms of real estate. Recently in June, the Suminoto Corp, a Tokyo based company has offered INR 2238 crore for a three acre plot in BKC, which is one of the largest land deals in recent times. It was the only bid received by the Mumbai Metropolitan Region Development Authority and the other two plots did not receive any bid at all.

As of now, BKC has attracted the attention of the global investors and in a scenario where home sales all over the country has slowed down considerably, BKC is standing out because of the deals that are going on here. It is a prime business district that came into prominence in 1990s and is now doing better than Lower Parel and Nariman Point in terms of infrastructural developments and traffic management. Some major investments were made here in recent times like the Blackstone Group investing INR 2500 crore for the purchase of One BKC. Blackstone backed K Raheja Corp is also touted to buy the former headquarters of Citibank India for INR 395 crore, sized around 130,000 sq. feet, in association with South Korea’s Mirae Asset Global Investment.

Demand is steady for property in BKC

BKC has been promoted by the government as a finance center for quite some time and many modern office buildings have come up here, according to experts like Ankur Gupta of Brookfield Asset Management, which in 2018, had bought the Equinox Business Park, a property sized around 1.25 million sq. feet, from Essar Group for INR 2400 crore.   And companies rush to buy these new office spaces, a trend seen almost anywhere in the world. Other factors that work for BKC are the easy access to the airport and good connectivity to the rest of the city which makes it easier to commute to work. Investors here are also looking for income generating assets where tenants would not mind paying for the right property although demand for land parcels are yet to happen in high numbers.

Because demand for land parcels are low, the market in this segment is down and local developers are not showing interest in buying land but it could happen sometime in the future. On the other hand, the supply of office spaces though, is fast reducing and the vacancy of office spaces has dropped from 13.4% in 2017 to 5% in the first quarter of 2019. The rentals for quality assets have gone up likewise. Lease contracts have also gone up and BKC is fast becoming a prestigious destination in terms of owning an office space here. The region is well connected and with new infrastructural facilities coming up, the region is now at the same level as other major international business districts.

According to industry experts, the same signs of development were initially shown by Lower Parel at one point of time but the region was plagued by poor infrastructure. Nariman Point had once seen huge number of companies flocking to it and in the same manner, companies are now moving out of Lower Parel and shifting base to BKC. Apart from the commercial office spaces, some major residential projects are also coming up here with investors like the Sunteck Realty constructing some major luxury residential properties here. It is now developing 2 to 2.5 million sq. feet of office space in the vicinity and their strategy is to build, lease and own these assets. Hence, it can be said that in recent times, BKC has made quite an impact on the real estate developers in the city and the region is sure to become a talking point in the years to come.

Resident Editor
« Why do Indians still prefer investing in property over anything else?
Key reasons ready to move home excites you more »