From Salt Pans to a Commercial Center- The story of Airoli 25 years ago, Airoli was a village, filled with salt pans and farmlands. At one juncture development came to the city, thanks to the over-crowding of Mumbai. This was the time when Navi Mumbai was being planned as a satellite city to Mumbai. Because of its strategic position, Airoli became the connecting node between Mumbai and Navi Mumbai, it became a preferred place for major business conglomerates. It had the tactical position of being easily accessible from Mulund, South Mumbai and Navi Mumbai. The land parcel was cheap, labor economical and electricity available at low-cost. The Mahavaitarna helped with the electricity cost and the APMC market with its various tax cut offs made the grain and vegetable available at reduced prices.

The place saw an insurgence of Multinational companies like Wipro, Mimdspace, TCS, Reliance Communication, Reliance Petro Chemical, Patni, Life science, etc. The farmers sold their land to developers and the commercial hub of Airoli started coming into existence. The movement was initially started by the coming of Reliance in the region. The area saw a surge in population movement because of Reliances culture of walk to work. Towers with 1 BHK started coming up with prices but half of what one would generally pay in Mumbai. At that time, if one was to travel on the Thane-Belapur road, one could see corporate offices on the left hand side and residential spaces on the right. Middle class salaried individuals from the Maharashtrians, South and North Indians and Guajarati community made up for the population demographic in this province.

Navi Mumbai as a city started growing with population migration happening from Mumbai to Navi Mumbai. Airoli became to gateway to Navi Mumbai and because of its connectivity through JVLR, it was still closer to western suburbs of Mumbai. The eastern express highway and Palm Beach road being its main pillars of development. Also, with the commencement of the Thane-Turbhe-Vashi Rail, the importance of this region has increased two-fold. People who wanted to get away from the chaos of Mumbai started migrating to Navi Mumbai and specifically Airoli.

By this point, Airoli started attracting investors and home buyers with needs and demands of luxury apartments. Developers like Sunteck Realty Limited, Piramal Group, Lodha started building small townships and luxury apartments to cater this requirement. Needless to say that the area saw an upswing in prices. In 2003, the psf in Airoli was priced at INR 1,100. In 2008 it shot up to INR 3,300 and in 2015 it is priced at INR 10,000 psf. 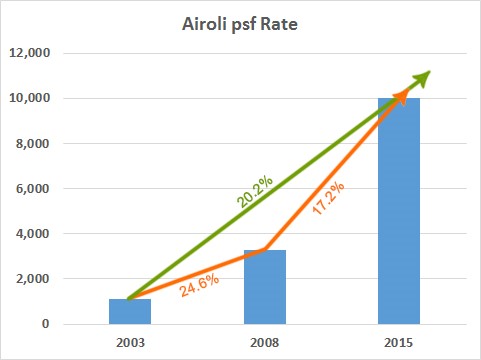