While it is one thing to unwittingly overestimate the value of properties, according to recent reports, the state government has supposedly gotten the wrong calculation for guidance value of properties. It has led to the abnormally high market rates and this has been carried out often without the support of any relevant data.

How is Stamp Duty collection related to the issue?

The emphasis, according to the many officials is on stamp duty collection, which is definitely one of the key revenues of the state. Unfortunately, the real estate market is not performing as brilliantly as the government would like us to believe. Certain field level registration officials have put in some inputs regarding the trend of valuation and this has been somewhat overlooked by the central valuation committee. Moreover, they had also not factored in bank deposits rates which it should have done while estimating the price trends of the real estate.

Moreover, the Stamps and Registration department has notified that an increase in 50% in guidance value of the commercial properties, which has definitely raised a lot of eyebrows. According to an official, even a small percentage hike in Bangalore can hit the buyer hard because of the method of valuation currently followed.

Hence, the department had put some guidelines in place for guidance value of properties. According to the new rules, the properties that face the road would be revised upwards of 25%. Those who are not okay with the idea are of the opinion that the roads have always existed and there is no reason to suddenly confer special attention to them all of a sudden. To ask the buyers to pay more just because there is a road in front of their apartment is not an idea everyone is okay with.

What other anomalies have been noticed in this regard?

The new guidelines have also levied an additional 10% rise in the guidance value for properties that face any kind of park. However, the real scenario is quite opposite as most people are not interested in buying such properties because it would result in an increase in human traffic in front of the building and often results in commotion from community activities which many are not okay with.

A buffer of 30% was always maintained between the market rates and guidance value of properties so that any kind of unfairness could be ruled out. That would have benefitted both the buyer and the seller. But with guidance value overshooting the market price, the buyers are left confused and they are not sure about which price to trust anymore.

Such an incident was recently reported in the North Taluk of Bangalore where the Stamps and Registration Duty department had fixed a guidance value of about Rs 6.63 crores for a plot of agricultural land. According to an official, this was really absurd because why would one want to invest so much just for the guidance value when that piece of land can only be put to agricultural use and nothing else. Another piece of land in an area known for its IT firm was given a guidance value of Rs 16 lakhs and it also leaves one wondering why one would want to grow crops with IT office buildings surrounding the area.

How can this matter be brought under review?

According to the Stamp Act, it is required by the Government to revise the guidance value of the properties each year so that it is in sync with the market rates. This how all the transactions are accounted for and the government also keeps getting its share of revenue without overburdening the buyer in any way. The complaint is that once the real estate industry suffered a huge set back due to demonetization, the Stamps and Registration department did not care to reduce the guidance value at all and that had left many industry experts baffled. 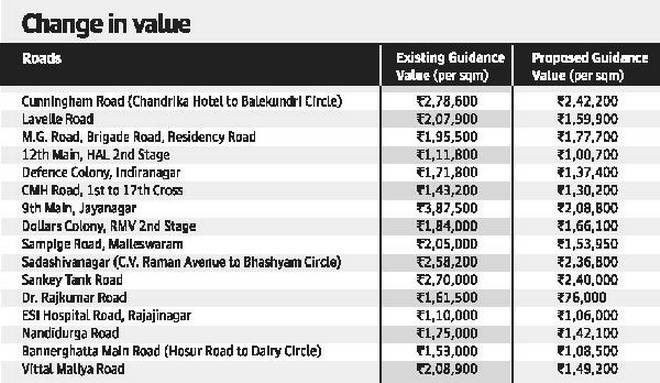 It is now expected that the government should immediately review all the guidelines pertaining to guidance value and then correct all the various anomalies that it has earlier given rise to because of the miscalculations. It is important that the home buyers know how much money they are shelling out and whether that is completely unnecessary or not. Every system has some leaks but it is the duty of the government to plug them as soon as possible. Instead, it seemed that the present government had only inflated the prices much beyond what it is supposed to be. There is no data to support such a higher price and even the industry officials