Mumbai to be transformed with development of new infrastructure; may boost real estate growth as well The real estate sector in India has seen a slowdown over the past three years and Mumbai, the financial capital of the country, has been plagued by large unsold inventory, complete with numerous stalled projects. There are also a large number of unsold units in the suburbs, but in the last two quarters of 2019, some improvement has been seen which has filled developers with a little hope. Infrastructural developments in Mumbai should go a long way towards transforming the real estate sector in the city.

Several projects have been lined up and work on some has already started. The Neral- Karjat precinct of the Mumbai Metropolitan Region has seen a lot of growth with 88 local trains now connecting this region with the rest of Mumbai. The development of this area is under full swing and it is expected that around 50,000 Mumbaikars will start living here in the near future. The booming infrastructure here is also going to play a significant role in the value appreciation of the properties here. The rents of this region are rising, being directly proportional to the improvements underway. The government is also likely to improve the connectivity of the region further.

The Metro system is also being extended to previously overlooked regions like Wadala, Charkop and such and they are going to reduce the traffic congestion in the city and relieve the packed Mumbai Suburban Railway network as well. The outer edges of MMR will also see price appreciation with these developments. The regions of Neral and Karjat are now seeing a lot of affordable homes coming up and many first time buyers are thinking of buying their first homes here.

The area is seeing a number of upcoming projects like the Mumbai- Trans Harbor Link and the Navi Mumbai International Airport is also being developed in full swing. This will greatly benefit the homebuyers of that region. The former is a six lane sea bridge with a total length of 21.8 km and it will considerably reduce the traveling time between Mumbai and Neral and Karjat, almost by an hour. The freeway, on the other hand, is also going to be connected to the Mumbai- Pune Expressway as well as the Western Freeway. This is going to boost the real estate market in the region because it is estimated that about 70,000 vehicles will be using that bridge daily. The distance between Churchgate to Navi Mumbai is also going to come down from 40 minutes to 20 minutes.

The upcoming Navi Mumbai airport is also going to act as a catalyst for this region. The project was initiated in February 2018 and the Greenfield International Airport is likely to become an aerotropolis, coming up in the Ulwe- Kopar- Panvel area of Maharashtra. A number of variables will come into play and the adjoining areas of Mumbai will get realigned and reconstructed likewise. The airport will spark a realty boom in Panvel and other surrounding areas near the same.

Some other factors to be noted

The new age developments are perfect for the usage of millennials and they are the target group for many affordable housing developers. The new consumer base considers connectivity as one of the prime aspects of choosing their homes and the new transport infrastructure of the city is sure to appeal to them. There are two upcoming metro lines and several others are going to be initiated. Water taxis are also going to be introduced to travel from Mumbai to Navi Mumbai by mid 2020. About 60% of the Mumbai-Nagpur Expressway is also likely to be completed this year.

Here are some of the major infrastructural projects to look forward to:

Work is also in progress over various stages at Metro 2B, extending from DN Nagar to Mandale, Metro 4, from Wadala to Kasarwadavali and Metro 6, from Swami Samarnath Nagar to Vikhroli. The work has also started on Metro 4 A, extending from Kasarwadavali to Gaimukh, Metro 5- Thane to Bhiwandi to Kalyan and Metro 9, from Dahisar E to Mira Bhayander and Andheri East to airport. The MMRC is looking after the Colaba- Bandra- Seepz underground line and they are expected to complete 55 km of tunneling in 2020.

One of the primary goals this year is to beat road congestion and it has been seen that people here tend to spend 65% more time on the roads compared to other parts of the world during peak hours. With 337 km of Metro lines coming up, road congestion is expected to go down by 35% as per studies.

The MMRDA had also recently inaugurated the Bandra-Kurla Complex- Chunabhatti road corridor in 2019 and the Kalanagar Flyover is expected to be completed in 2020. Work has also started on the Chheda Nagar junction to relieve traffic on the Eastern Express Highway. The Mumbai Port Trust is aiming to decongest road traffic with the introduction of water taxis and they will start from the domestic cruise terminal at Princess Dock in South Mumbai to Belapur, Vashi, Airoli and the Kanhoji Angre Island in 2020. Six agencies have been roped in to start the services and with them, the traveling time from Mumbai to Navi Mumbai is going to come down considerably. The traveling time between Mumbai to Navi Mumbai is also set to come down considerably with the Mumbai- Trans Harbor Link, which is a INR 17, 833 crore project. It will link Sewri in Mumbai to Nhava Sheva in Navi Mumbai.

The delay with this project is that several utility lines pass through this area and are laid under the sea. The alignment of MTHL will pass through utilities belonging to Bharat Petroleum Corporation, as well as Oil and Natural Gas Corporation. Permission is also being awaited from authorities to cut trees for the project. Another major road project will be the 42.75 km sea bridge which will extend from the proposed Bandra- Versova sea link to Virar, which is 30 km off Borivali. The 17.17 km Bandra- Versova project will also be completed in the next 5 years. Once done, the travel time from Bandra to Versova will come down from 90 mins to 10 mins.

Other developments in the offing

One of the major initiatives of the state government is the 701 km expressway between Mumbai and Nagpur that is expected to be completed at the end of January 2021. On the other hand, more than 500 km of the stretch between Nashik and Nagpur is expected to be completed by December 2020 or January 2021. The MSRDC has also planned 17 townships along this corridor and the development plans of 8 more are to be released in 2020. The townships will be developed with an aim to generate employment and they will be equipped with the basic infrastructure as well as social amenities like roads, hospitals, schools, colleges, water supply, electricity as well as fire brigade services. 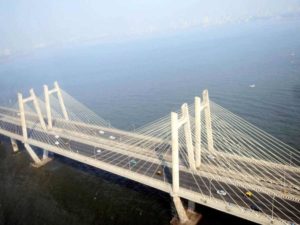 The Last Mile connectivity is what the MMRDA and the MMRC are looking to improve. The first and last mile connectivity are major issues in Mumbai and it refers to the mode of transport which the people use to get to other mass- transit systems like the Metro and the railway and for this, the Mumbaikars rely heavily on taxis and auto rickshaws. New provisions have been made, because of which from January 2020, people will be able to take a bike or a bus from the Mumbai metro stations to their homes and offices. A bus aggregator and three bike sharing mobile applications will be implementing their ideas on a pilot basis on select stations of the Metro 1 line. The bike sharing route will start from DN Nagar while the bus aggregator will start four routes from Powai to Saki Naka, Marol Naka, Jagruti Nagar and Ghatkopar metro stations.

Metro 1 will also have two cycling stretches along the median and they are likely to be implemented in 2020. They are also to focus on cycling paths, pedestrian zones and plazas which will come up around Metro 3. The new government has specified that no projects have yet been stalled and that only the site for the Aarey car shed for Metro 3 corridor is under review. The work for Mumbai- Nagpur highway will also be speeded up. The Kalanagar flyover is to be opened in March and the work for the Santacruz-Chembur Link road and the Bandra- Kurla Complex-Vakola junction will also be opened this year. The Bandra- Kurla Complex or BKC has been a huge success and now, another world class business hub is going to be established soon.

BKC is also now coming under the airport funnel zone, which happens to be a restricted region, and the developers are now unable to increase the heights of buildings. The Wadala land is free from such issues and the MMRDA is also the special planning authority for the development of the 177 hectares of notified land. The clearance was given to MMRDA in December 2019 and various types of land developments were proposed in Wadala. They will be leased for 80 years to the various parties and the revenue generated will be used as funds for various other proposed infrastructure projects, which will include metro lines. The MMRDA has taken up about Rs. 80,000 crore worth of projects of which about Rs. 44,869 crore will be spent on the various metro projects.

With so many projects lined up, Mumbai is on the verge of undergoing a major transformation and some of the issues bugging the city will be dealt with, giving a major impetus to livability, connectivity and of course, the housing market.