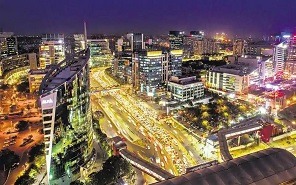 Gurgaon’s real estate market is already witnessing a major boost over the last few months with demand having picked up after a few lethargic years. Unsold inventory has started coming down with stabilization in prices, lower GST rates, RERA and increased transparency, PMAY (Pradhan Mantri Awas Yojana) and other affordable housing benefits and several Government moves to boost the sector. Additionally, the expansion of the Gurgaon metro railway network has automatically spurred development of residential real estate and infrastructure in several areas across the city.

In another good move for the Gurgaon real estate market, the State Government has lowered the regulations pertaining to minimum area for residential and industrial colonies in Gurgaon and also in nearby Faridabad. This could be a booster shot for the Gurgaon realty market and real estate developers are already gung-ho about future projects. This decision will also enable the development of several smaller housing projects which will be great options for those investors who are seeking housing units located in group housing societies and plotted colonies in the city.

Learning more about this key decision

Real estate developers remain highly optimistic about the long-term potential of Gurgaon’s real estate market which will now be aided further by the introduction of revised area regulations.

Other aspects worth knowing about

The decision will pave the way for the availability of more projects with homes priced lower than Rs. 1 crore. The license based area norms have been changed under the Haryana Development and Regulation of Urban Areas Act of 1975. A proposal has also been made for making the Deen Dayal Jan Awas Yojana applicable within the GMUC (Gurgaon-Manesar Urban Complex) which could be another boost for the city’s real estate sector.

The Haryana State Government introduced these revised area norms since the applications had come down for licenses under the categories mentioned above. As a result, an initiative had to be taken for sparking higher demand. Just 3 licenses were made in the last 5 years for development of plotted colonies. These applications came from Dharuhera, Faridabad and Panipat. The last license that was given for an independently plotted residential colony in Gurgaon was in the year 2014.

The Government thus decided on lowering the area/plot size since it is tough to aggregate around 100 acres of land for plotted colony development. With the Deen Dayal Jan Awas Yojana covering Gurgaon, developers will now be able to build three floors on plots sized between 60 and 150 square yards. Floors cannot be presently built on plots sized below 180 square yards which is something that will change soon. Buyers will also get benefits under PMAY on affordable housing units likewise.

This will spur higher construction volumes for housing units priced between Rs. 50-60 lakhs on an average, thereby offering more options to homebuyers who would previously seek out comparatively cheaper and similar options in Greater Noida or Noida. The mid-segment developers may also get a second lease of life due to this new decision. Liquidity levels may improve with the lower entry barrier for group housing projects.

Several market and industry experts feel that Gurgaon did not have any proper budget housing category till date except for a limited number of affordable housing units. The affordability aspect should be tackled through the new decision and the Government will also ensure that no unauthorized/illegal housing project comes up in the city while overall liquidity will go up. This proposal should have an immediate impact on supply levels of housing stock. The final approval is awaited from the Haryana Chief Minister and the Council of Ministers. Creation of new market inventory may require a few years as well. Developers who have piled up inventory will not foray into this segment just yet. Several new players may venture into the budget and mid-range housing category over the next few years in Gurgaon as predicted by industry experts. All in all, the whole scenario looks quite promising for the Gurgaon real estate market.

Resident Editor
« Integrating Tech with Real Estate and Mortgages: The Square Yards Way
10-15% growth expected in Bangalore property prices on the back of sustained growth »