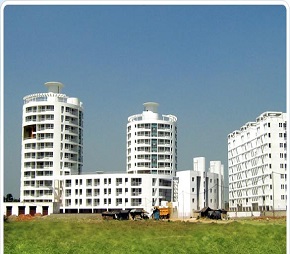 ₹ 36.50 Lac to 87.42 Lac
₹ 5000 Per Sq. Ft Onwards
Status: Well Occupied
Ratingi
Our proprietary project rating system assesses the level of amenities and specifications provided inside a residential project to help you objectively evaluate the comfort & convenience that you are going to get. We rate it like we were buying it.
Decision Drivers
i

The Shrachi Group is a business conglomerate worth INR 1, 000 crore and is involved in business verticals like real estate, agro-machinery, stationery and engineering. The Group is spearheaded by S.K. Todi and his sons Rahul Todi and Ravi Todi. Shrachi Realty is one of the biggest names in the Kolkata and eastern region markets.

Shrachi Developers was founded as Bengal Shrachi as part of a partnership with the State Housing Board and State Government. This takes care of mass housing and is one of the first successful joint ventures between public and private entities in the state. Shrachi Builders develops both residential and commercial projects including group housing projects, townships and shopping centres. The Group has more than 10 years of experience in real estate with a solid track record. The Group has several landmarks to its credit and the portfolio of Shrachi properties includes prestigious addresses like Shrachi Manor, Gardens and Niket to name just a few.

All Shrachi residential projects are built at emerging/prime locations in the city and its suburbs. The Group offers premium amenities and facilities to residents at its projects and offers properties that cater to almost all budgets. The Group is known for its emphasis on ethical business dealings and quality. The latter aspect is taken very seriously at the Group and it adheres to stringent quality standards. The Group also emphasizes highly on customer service.

The Group believes in ensuring total customer fulfillment and believes in core values like commitment, reliability, transparency, integrity and honesty. The Group counts experience and engineering and design expertise as its biggest strengths. The Group has a solid track record of delivering projects on time and is a name to reckon with in eastern India.

There are several landmark projects developed by the Group over the years and here’s taking a look at some of them:

·         Greenwood Nook- This premium project is located near the EM Bypass and lies just 1 kilometer away from the Ruby Hospital. The project offers great connectivity to almost all parts of the city along with premium amenities and facilities. There are several housing units for varied income groups while there are duplexes as well. Elevated landscaping and a sky path are major attractions along with natural greenery, kid’s centre, community centre, health club and more

·         Lakewoods- This landmark project is located along the Narkeldanga Main Road and offers excellent connectivity to several parts of the city. The project offers abundant natural greenery in tandem with serene water bodies and an awe inspiring façade. The project also comes with several premium amenities and facilities for residents while the classic design itself is a major attraction at the project

·         Dakhinatya- Located at Baruipur, this premium project offers natural greenery and lovely views coupled with premium amenities and facilities. The project is well linked to the Baruipur station and EM Bypass and offers acres of natural greenery in tandem with a landscaped garden, community hall, indoor game zone and more