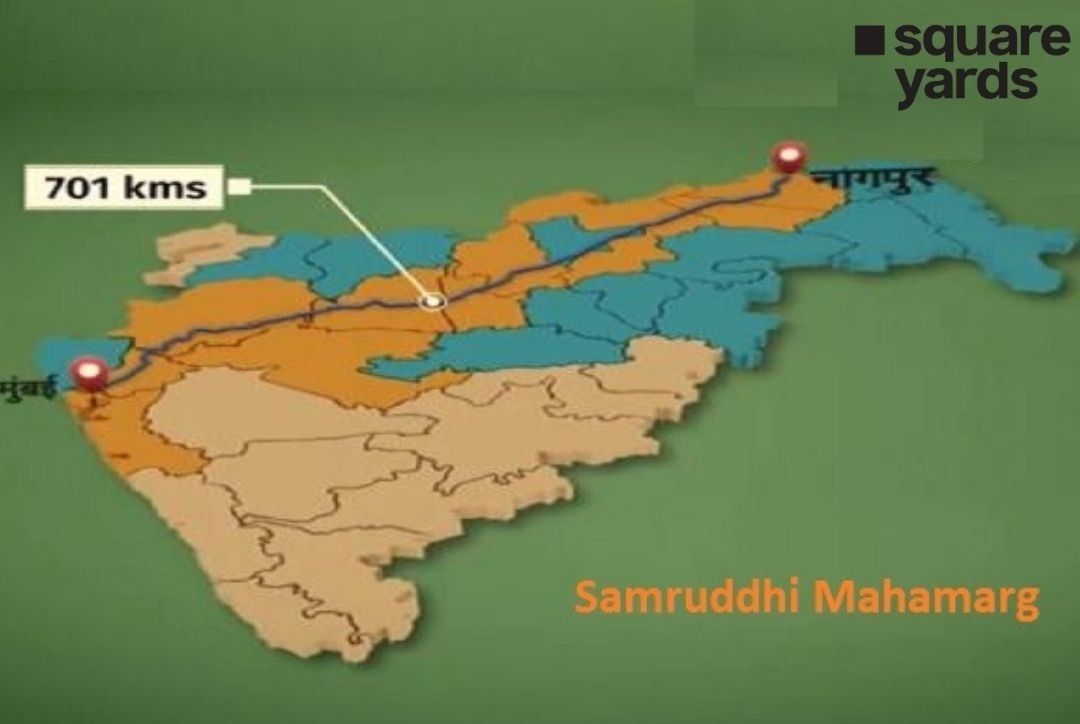 One of India’s longest Greenfield road projects, Samruddhi Mahamarg, is all set to open for traffic by December 2022. If everything continues as thought, the connectivity between Nagpur and Mumbai will get shorter and smoother. Also known as Mumbai Nagpur Expressway, the Samruddhi highway will pass through 10 districts and 390 villages.

Moreover, the project is designed with an aim to reduce the traveling time between these two major cities of Maharashtra to 8 hours. The expressway requires 8,600 hectares of land for its development and hence, they have been acquired for its construction. Read on to know more about the long-overdue Mumbai Nagpur highway and its impact on the real estate sector.

The expressway will be amongst India’s longest Greenfield road projects, connecting Mumbai and Nagpur (the winter capital of the state). The Maharashtra State Road Development Corporation (MSRDC) is leading the project while the designing framework would be the EPC (Engineering, Procurement, and Construction) model.

With the route alignment connecting Amane village in Thane district to Shivmadka village in Nagpur, the project is built to render improved connectivity to the Vidarbha and Marathawada regions.

The total cost of the project comprising the land acquisition fund amounts to ₹ 55,000 Crores. However, the Maharashtra government is quite ambitious about the project and expects that the expressway will serve as the prosperity corridor for the entire socio-economic growth of Maharashtra.

For a quick overview of Super Communication Expressway, have a look at the table below:

Interesting Facts about the Mumbai-Nagpur highway

Before we proceed further, let’s have a quick look at the facts about this super expressway project:

As per the reports of Times of India, the toll for LWVs (Lightweight vehicles) for a one-way trip on the Samruddhi Mahamarg will be Rs. 1,100.

The toll charges will depend on the 2008 guidelines issued by the Central Government. Therefore, ₹ 1.65 per km for the exact kilometer will apply for lightweight vehicles.

On the other hand, the toll for HWVs (heavyweight vehicles) will be triple the charges on the LWVs.

Once the project becomes operational, it will cut short the travel time from Nagpur to Mumbai to 6 to 7 hours which is currently 15 hours.

Have a look at the map given below for better clarifications on the Samruddhi Mahamarg route: 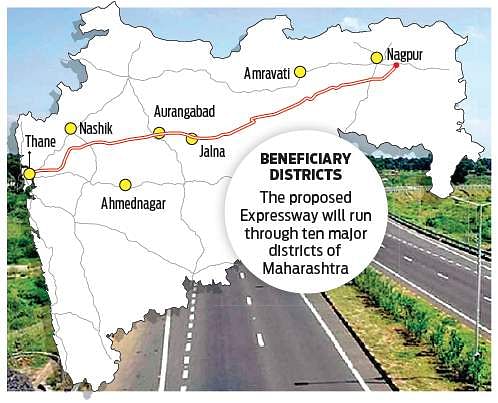 Some media reports have confirmed that the Mumbai-Nagpur Expressway project will be commissioned on time. Since the project is the biggest greenfield highway being planned in the country, it is supposed to be completed within the stipulated time.

70% of the construction work was done by the end of December 2020. The department plans to commission another 520 km of the corridor by May 2022 (earlier it was December 2021) while the remaining segment will be completed before December 2022. So, we can say that December 2022 would be the Samruddhi Mahamarg completion date or the deadline for the completion of the project.

Project Completion Date Moved to May 2022

MSRDC, the implementing agency, has stated that the construction of the expressway has been highly impacted due to the nationwide lockdown. Following the same, the project’s completion date has been extended to May 2022, as against the former target of December 2021.

The implementing agency also confirmed that the Nagpur-Shirdi stretch will open to traffic by the end of the year.

Adding further, the MSRDC said that the development plan for eight townships that would cross paths with the route was also prepared.

India’s widest and fourth-longest tunnel on the Nashik highway has been completed in a record two years.

The daylighting of this 8 km twin tunnel will speed up the completion of the 701 km long Mumbai-Nagpur Super Communication Expressway. Each tunnel is 17.5 m wide.

The tunnel connects Tarangpada village in Nashik district and Vashala Village in Thane district. Once it becomes functional, it will reduce the travel time through Kasara Ghat to five minutes from 30-35 minutes.

Our history is evidence of how efficient connectivity can enforce infrastructure and economic development and hence, result in excellent living standards in the rural areas.

The Samruddhi Mahamarg Expressway will connect many less-developed areas of Maharashtra. The project will help them in terms of both finance and infra.

Furthermore, the plan to create skill-based industries down the expressway can be profitable for the rural economy, so far which relies on dairy farming and agriculture.

One of the religious towns in the state, Shirdi that attracts a lot of tourists, will now get faster connectivity from the big cities like Mumbai and Nagpur. This, in turn, may enhance its potential as a destination for a second home investment.

Moreover, Nagpur hasn’t witnessed much traction until now due to the absence of growth drivers in the city. But this project is expected to bring a new dawn for its real estate sector.

As we know, Maharashtra is the warehousing hub of the country. The smooth connectivity will later encourage its importance and prospect in the process of supply chains.

Nevertheless, the unrestrained acquisition of irrigated land has caused agitation among many farmers. Although the state government has affirmed that it is offering different sites for their rehabilitation, many landowners just see it as an implausible deal.

Until now, ₹ 55,000 crores have been sanctioned to Maharashtra Samruddhi Mahamarg by the government to construct this expressway. Besides, 8,600 hectares of land have been acquired by far for this project.

Soon to be known as the fastest highway, Samruddhi Mahamarg will reduce the time take to travel from Nagpur to Mumbai. Travelers can now save almost half of the time i.e. they will only travel for 7-8 hours against the current duration of 15 hours. Even the train takes a minimum of 11 hours to reach Mumbai from Nagpur.

Besides, the Mumbai Nagpur Expressway will bring various real estate opportunities for builders as well as investors. Not only will this improve the connectivity between various villages in between but it will also strengthen the social and economic conditions of the rural areas in the state.

What is Samruddhi highway?

It’s an under-construction 6-lane 701 km long access-controlled expressway that connects two capitals of the state, Maharashtra, India. Samruddhi highway will be one of the country’s longest Greenfield road projects.

Which city is connected to Samruddhi Mahamarg?

Nagpur, Thane, Nashik, Wardha, Amravati, Buldhana, Washim, Jalna, Aurangabad, and Ahmednagar are ten cities that will connect to Samrudhi Mahamarg. It will have direct connectivity from Nagpur to Mumbai making it the country’s largest container port-JNPT.

What is the status of the Mumbai Nagpur Expressway?

Currently, 70% of the project is completed and the remaining is supposed to be completed by December 2022.

Who is making Mumbai Nagpur Expressway?

The project is led by Maharashtra State Road Development Corporation (MSRDC) while it is designed under the Engineering, Procurement, and Construction (EPC) model.