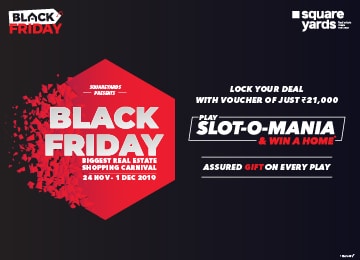 Owning a home is one of the biggest dreams in an individual’s lifetime. It’s a priority, at least, if not a dream. The digital space is often flooded with average offers that don’t really make sense or are unrealistic in nature. What if you stumbled upon a ‘too-good-to-be-true-like’ bucket of door-buster deals?

For the first time ever, Square Yards brings to you a Mega Real Estate Shopping Carnival in 20 cities across 8 countries around the world. That too on a Black Friday! The proptech player plans to break the wheel of shallow offers and give the homebuyer a real deal!

The curtains have been raised yesterday only! The much coveted Black Friday event has been officially launched with a newspaper ad in The Times of India and its unveiling on the official website www.squareyards.com. The portal has a feature to browse steal-worthy deals available during the event. One can lock a deal of one’s choice with a Refundable* Voucher of just ₹21,000 (terms and conditions apply). Moreover, if you’re unhappy with the shortlisted project, they will help you find a better project and you still get to keep your prize won on the ‘Slot-O-Mania’ game which you can play at the venue.

Square Yards has drawn a Tsunami to the realm of global realty market. The deals are on fire! It’s better you grab them before they turn into ashes…

Meri Wali Home Story – A Contest That Lets You…